Face-to-Face: Should athletes be required to take PE? 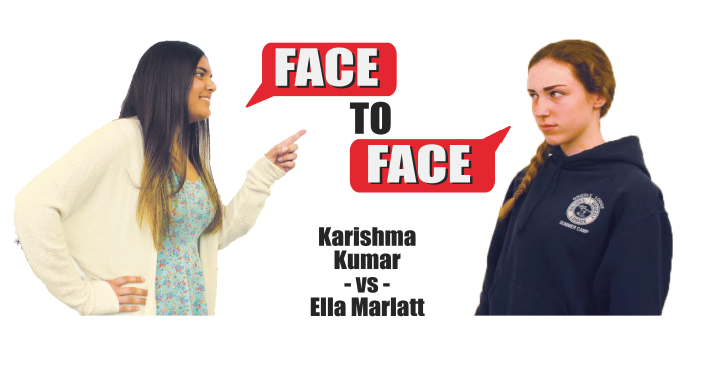 Face-to-Face is a feature that allows two members of the Redwood community to grill each other, argue, or simply converse about a relevant issue or event. We provide the topic, and they do the rest. This month’s participants are sophomore Ella Marlatt and freshman Karishma Kumar. The two debate whether athletes should be required to take physical education.

Do athletes benefit from  doing physical activities during P.E. class when they are already participating in sports practices after school?

Ella Marlatt: No, I don’t think [athletes] do because during P.E. we often just don’t try. After school we are working super hard at practice for around two hours and we are doing so much more than what we do during P.E. It isn’t really worth it for us.

Karishma Kumar: I feel like we could benefit by learning things not taught by a [specific] sport. I know at Redwood you become CPR certified. You also do other sports that aren’t one of

the sports you [practice regularly] so you end up being more well-rounded in your physical education.

EM: I do think P.E. helps with teaching you how to stretch appropriately and knowing your limits, but athletes who have been committed to one or two sports end up not learning

anything.  [For athletes, P.E.] could be substituted with another class or study hall.

Do athletes benefit from lessons taught during P.E.?

KK: I do feel like some of the things that we learn during P.E. CPR is very important as a life skill [because] you are able to save someone’s life. You also learn how to swim, which is very important for water safety. Like if you are in the ocean, you will know how to react if someone is drowning. P.E. teaches you how to save your own life as well as others. We are additionally taught how to stretch and work out effectively, so we get a good workout.

What is the value of having a P.E. class requirement in school?

EM: I think it is good to have a break, but a lot of times during P.E. we are just sitting in the classroom doing the exact thing we do in every other class.

If P.E. were not a state requirement, would the option of not taking P.E. encourage people to participate more in school sports?

EM: I personally don’t think so because if people want to do sports, they would have already joined. I know some people might just join so they don’t have to do it, but the majority of the population already pay the sport that they like and not requiring P.E. would not affect that.

KK: I think it wouldn’t really make a difference because people decide what kind of workout they want, so for a lot of people, sports are a big commitment that they don’t necessary want to pursue. Also, some people like to mix up the sports they play and not just have to focus on one sport, which is how P.E. is run.

If athletes participating in school sports didn’t have to take P.E. would they have to be required log hours in order to gain P.E. credit?

EM: I don’t think they should have to because anyway, athletes typically give up their breaks and anyway practice almost every day and the school knows that. Maybe if it was extra credit then it could be helpful. But it is helpful anyway to know how much you are doing to keep yourself accountable.

KK: Athletes should have to track hours because then people could be lying and just never show up for practice, but still not have to take P.E. Some accountability should be held.