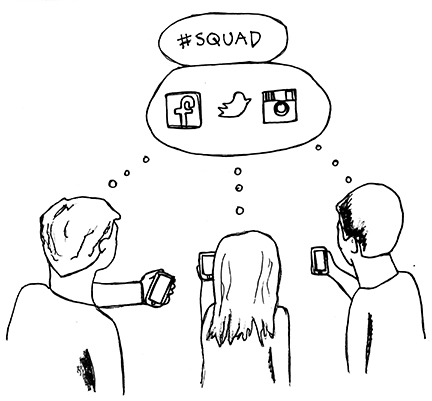 “Why don’t you just get an iPhone?”

I hear every time I reluctantly pull my LG Xpression slide phone out of my pocket. The answer is twofold: I would actually have to open my own wallet if I were to get a smartphone, and frankly, I have been driven to the point where I don’t even want one.

As one of the few Redwood students who can’t access the Internet from their phone, I’ve spent many years watching other people constantly use theirs. This leads to awkward situations like asking someone a question and having them look down at their phone rather than respond. In this sense, I’ve seen how the availability of a smartphone can create a lifeline between that person and their phone rather than between them and other human beings.

When I first got my phone as an eighth grade graduation present, I was thrilled to have a new method of communication and to no longer be the only person in my class without a phone. After arriving at Redwood, I was surprised to see nearly everyone pulling iPhones, Samsung Galaxies, and other data-capable devices out of their pockets.

I didn’t mind this until I learned firsthand how much people use them.

At my middle school, all phones had to be turned in at the start of the day, and no one touched them for the entire day. At Redwood, however, students are constantly monitoring their phones, and if they are taken away and lost in the office for even one period, that lifeline is broken and it becomes a dramatic event.

This innovative tool has put us on the path toward the destruction of social interaction.  An oncoming societal train wreck is quickly approaching.

The constant use of these phones has stopped people from actually interacting with other people.

Instead we choose to text or Snapchat other people because actual face-to-face interaction is too difficult and it is easier to communicate when we can first think about what we want to say.

It started when I was trying to have a conversation with my friend and he was texting instead of talking to me. It has since devolved into hanging out with a group of people and awkwardly sitting there while everyone else silently taps and slides their fingers across iPhone screens.

But now at Redwood this type of event is even more common. Whether it be at lunch or after class I often find myself being one of if not the only person who is trying to have a conversation with the people around me.

Everyone else just seems to be glued to their phones, choosing to communicate with people by text rather than communicating with the person in front of them.

The only part worse than this is that when a person decides they are done talking to me and decide to turn to their phone, I am forced to awkwardly sit there and hope for the bell to ring early.

People show their addiction to these device more often than they think they do. I can almost laugh at the desperation in people’s voices as they practically beg the teacher to let them use their phones after a test or after school. But, when everyone else celebrates being able to use their phones and stare at their screens I am left disappointed, instead staring at a wall.

The one group who I always thought was on my side was my teachers. Every one of their “back in my day” tales about how technology, specifically the smartphone, was ruining society made me feel warm and fuzzy inside. But then came a turning point where teachers were checking schedules, emails, and communicating on their own smartphones.

And the biggest hypocrisy of all? Teachers now allow and even request that students use their phones in class.

Now I am put at a disadvantage compared to everyone else in my classes because I am not up to date in having a smartphone.

I become the only person in my classes who is forced to take handwritten notes or use a paper dictionary because I can’t simply take a picture and I don’t have the capabilities of the internet in the palm of my hand.

If a smartphone is going to be a requirement for school, it needs to at least be on my supply list.

The solution to this problem is not something huge like not allowing smartphones at Redwood, but I think it would be easy enough to make sure they are kept in everyone’s backpack during class time.

Despite the disadvantages– and slight loneliness of having these disadvantages –I remain firm in not wanting to get a smartphone thus fueling Apple’s corporate takeover of the teenage soul.

“I fear the day that technology will surpass our human interaction,” Albert Einstein once said. “The world will have a generation of idiots.”