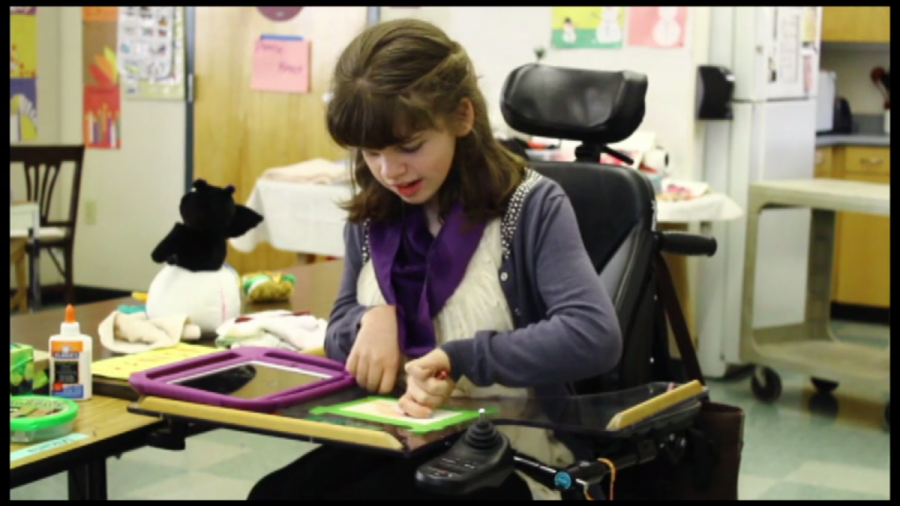 https://vimeo.com/119205768Shannon opens her huge blue eyes and looks around her bright room. Her bed, a full sized mattress, lies frameless on the ground. She looks up to the inviting smile of her aide, Claire, who spends the mornings with her. Claire helps her out of bed and together they pick out a suitable school outfit, brush her teeth, and make their way into the kitchen.

After breakfast and a custom french braid, Shannon is ready for her day. She points at the door and bounces in her chair, waiting for the bus. Once the bus arrives Shannon drives herself up to the wheelchair entrance, and the lift slowly rises. She gets buckled in and watches the blur of trees as she makes her way to school.

Once at Redwood, the bus lowers Shannon onto the pavement, where a parade of teachers and fellow classmates await her arrival.

“Shannon loves going to school,” said her mother, Mary Higgins. “When the weekend comes, she is so sad. She keeps asking me about school.”

Junior Shannon Higgins is 16 years old and has polymicrogyria, a rare neuronal migration disorder that causes cerebral palsy symptoms, such as difficulty expressing herself verbally and controlling her body to do what she wants.

Shannon spends a majority of her day at school in room 301, a room dedicated to special education at Redwood.

Specialized alternative learning techniques help to teach her communication skills and to learn how to be independent.

Kim Cochrane, Shannon’s teacher, has been working with her for the past two years.“Shannon is currently working on her writing on her iPad in a program called Proloquo,” Cochrane said.

Proloquo is an alternative communication software for those who have difficulty speaking, and offers features for users with learning disabilities.

“The most important thing for her is to be empowered with her iPad to communicate,” Cochrane said. “That’s why she’s working on the spelling, so she can spell words out and tell us what she wants. She’s also working on listening and focusing.”

Although Shannon thrives in the Redwood environment, she still faces many difficulties.

“Imagine what it would be like to be stuck in a body that doesn’t work for you. Here’s this beautiful 16-year- old girl who can’t express herself. Think of how frustrated you would be,” Cochrane said.

Before Shannon transferred to Redwood from Terra Linda High School her freshman year, the only thing she had to communicate with was a board displaying two pictures. She was expected to express her feelings and wants by pointing or tapping on one of the two images.

Cochrane pushed Shannon to be able to express herself. She learned how to use Proloquo and was finally given the chance to truly express what she wanted and how she was feeling. Cochrane said that Redwood has significantly opened doors for Shannon’s communication skills.

In between her lessons, Shannon goes on walks around the campus, either with an aide or a student helper. She loves to drive herself through the halls on her wheelchair and smile at people. Shannon is hard to miss, with her ever-smiling face and her speedy wheelchair wielding large “yes” and “no” signs for quick communications.

Due to her disability, Shannon is unable to walk. However, she is able to compensate for this by crawling and shuffling around on her knees or steering her mechanical wheelchair to her desired destinations.

Although Shannon has the ability to shuffle around on her knees, she is not necessarily supposed to, due to recent knee surgery.

However, Mary and Cochrane tend to make exceptions because, according to them, being able to crawl around is Shannon’s version of freedom.

“It’s like when a kid gets their license,” Cochrane said. “They are finally able to explore and really get the opportunity to be an individual.”

Shannon has recently learned how to drive her own wheelchair and can easily maneuver it through the school’s hallways.

Shannon gets back from school at around 3 p.m. and heads straight to her room for a much needed nap. Afterwards, she enjoys spending time with her family.

On weekends, Shannon goes horseback riding. She is always excited to show people photos of her horses. She has been riding every week since she was six years old at Halleck Creek Ranch, a ranch that uses horseback riding as a means of therapy for people with special needs.

Shannon uses Facetime to keep in contact with friends and family.

“She really wants to connect with people and make friends,” said Mary. “Friends are everything to her and it’s harder because she can’t just pick up the phone and invite someone over. Having those connections is difficult. We need to find more avenues for her to connect with people because it’s just torture for her.”

Shannon will often spend time going through her contact list on Facetime in an attempt to reach her friends and family. She goes down the list until someone picks up.

“Shannon is so intelligent…she is one of the nicest kids I’ve ever known, ” said Cochrane. “She doesn’t let her disability get in her way.”