Packing a Lip: Smokeless tobacco and its health risks 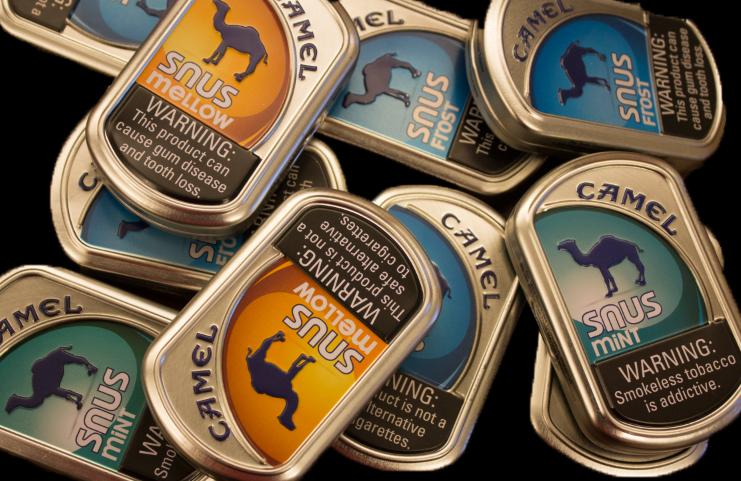 Sitting on the shelves behind gas station counters are small handheld tins decorated with shiny seals, polished faces, and intriguing logos. Inside is

smokeless tobacco, or “dip” as many call it — a form of tobacco made to be placed in between the inner lip and gum of one’s mouth.

A 2012 study by the American Cancer Society showed that 3.5 percent of Americans use dip, and of those who use, 46 percent are younger than 25, 11 percent being high school males.

A recent Bark survey discovered that 12.7 percent of males at Redwood have used smokeless tobacco and of those, 4.2 percent dip on a regular basis, while only 1.4 percent of females have ever tried it.

“Andrew,” a senior who wishes to remain anonymous, said he began “dipping,” or using smokeless tobacco, the summer before his freshman year.

Andrew said that he has always been familiar with tobacco, even as a child, so he was very against dipping.

“I remember when I was younger I would always make fun of my dad for dipping,” Andrew said. “He said that if I was going to make fun of him for doing it, I at least had to try it. It was Copenhagen longcut and I had it in my mouth for only 30 seconds before throwing up.”

Andrew’s first time trying smokeless tobacco turned him off from the drug until his freshman year, when he tried pouches instead of long cut. Since then, Andrew dipped on and off up until the summer going into his senior year when his use became more frequent.

“Once summer going into my senior year hit, I went from packing lips once a month to on the weekends,” Andrew said. “Then once school started, it turned to once every other day, to everyday, to multiple times a day. Then before I knew it I was packing more than a tin everyday.”

Andrew said that on a regular day, he will pack roughly a tin and a half.

“I typically pack a lip before school, during break, in class, on my way to lunch, when I get home from school, while I’m doing homework, and before I go to bed,” Andrew said.

Andrew said that he uses this smokeless tobacco to help him relax.

“When I’m super stressed out or anxious, I’ll go after school to a scenic place to pack a lip. I feel like it takes away a part of the stress,” Andrew said.

But while chewing tobacco serves as a stress reliever for Andrew, the health risks are still prevalent.

Leukoplakia, or white mouth lesions, are commonly found in those who chew tobacco daily according to San Rafael dentist Rita Lanphier.

“I commonly see this in patients who chew tobacco frequently in the inner lip and behind the molar,” Lanphier said. “They appear in white wrinkly patches, and although they are not cancerous to begin with, with long term use, the cells begin to change and spread and can eventually turn into cancer.”

According to Lanphier, after long term use, the leukoplakia can spread too deep in the gums to the point where it becomes irreversible, but can be healed if the user quits in the early stages.

But due to their very high levels of carcinogens, or cancer-causing agents, American smokeless tobacco products are tied closely to cancers of the stomach, mouth, and pancreas, as well as high blood pressure, blood clotting, and heart disease, according to the American Cancer Society.

The American Cancer Society also said receding gums and tooth decay are also commonly found in those who use smokeless tobacco.

Andrew has noticed that since he began using tobacco regularly, part of his gums have receded significantly.

“I’m not worried about the long term effects of dip because I plan on quitting once I leave for college,” Andrew said. “College will be the next chapter of my life and I don’t see myself having to dip as much because I will be so busy with all my classes. I’ve quit before, so this time shouldn’t be a problem.”

This, along with tobacco’s rapid distribution of nicotine to the brain, is what gives tobacco such addictive qualities, according to the National Institute of Drug Abuse.

One of the biggest misconceptions about smokeless tobacco is that it’s a safer alternative to cigarettes, according to Redwood Wellness Director Jessica Colvin.

“Whether you smoke or chew, there are no ‘safe’ tobacco products,” Colvin said. “Just like cigarettes, chewing tobacco contains nicotine, which is highly addictive. Whether you smoke cigarettes or chew tobacco, about the same amount of nicotine enters the bloodstream.”

“Brad,” a senior on the baseball team who asked to remain anonymous, recounted how a teammate introduced smokeless tobacco to him before baseball practice.

“It’s just unavoidable when you’re playing baseball – it’s part of the culture,” Brad said. “Players have been using it since the early days of baseball, and since then it’s become a tradition. We look up to coaches and our favorite MLB players and see that they all dip, so eventually it becomes a normal thing that we get accustomed to.”

On Feb. 24, a new bill was proposed in the California Senate to ban chewing tobacco in all Major League Baseball venues across the state.

The main purpose of the bill, proposed by Assemblyman Tony Thurmond, is to protect young impressionable athletes trying to emulate their MLB idols, as well as protect professional baseball players from the health costs of tobacco.

Redwood’s current policy prohibits drugs and alcohol from being used on campus, including on the baseball field, and according to Brad, this rule is strongly enforced by the coaches.

“During our winter ball season, the coach saw that one of the players had a lip in, so before practice he huddled us all together and took a knee,” Brad said. “He said that he wasn’t going to tolerate tobacco on the field and that it was the hardest thing he has ever had to quit and didn’t want anyone to get hooked on it, which moved us all.”

His coach’s words and struggle with tobacco is one of the reasons Brad has decided to quit altogether.

“It factored into my decision [to quit] because I don’t want to be in his shoes and dependent on it later in life,” Brad said. “He would wake up at three in the morning and go buy a tin because he was so addicted to it, and I don’t want that to happen to me.” Brad said.

Since then, Brad has begun cutting down his weekly usage of chewing tobacco.

“I’ve grown such a tolerance to it to the point where now it’s just gross,” Brad said. “ I’ve progressively started slowing down and reducing my usage with the goal of just stopping all together.”