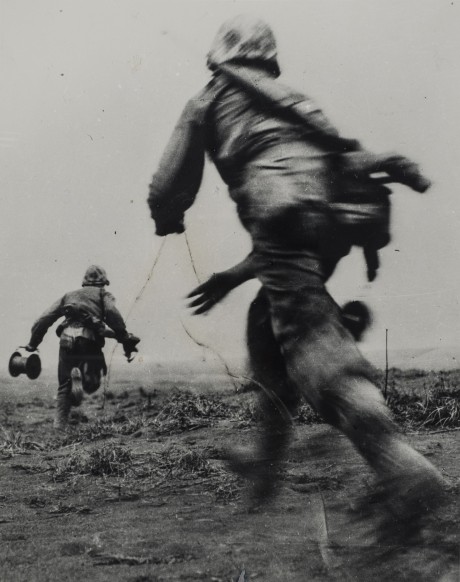 Residing in San Anselmo’s Smith Anderson North Gallery, Schwartz’s soothing-yet-disquieting images focus on the positive interactions between white and black children in the slums of New York City, despite the harsh realities of a community divided during the 1930’s and 40’s.

Born and raised to Polish and Romanian immigrant parents in Williamsburg, Brooklyn, Schwartz (1913-2013) spent most of his childhood participating in community street games with other children in nearby city slums. This soon became his inspiration for photography.

Schwartz’s black and white prints oftentimes include three or more people in a candid, authentic interaction. The prints have a similar narrative aesthetic to today’s popular “Human’s of New York” blog, but without words, these historic photos tell stories on their own.

A standout in the gallery is “Tricycle Gang,” which depicts three little black girls and one white boy giggling together while they ride their tricycles down a city sidewalk in Brooklyn. Schwartz’s title of the photo juxtaposes the innocence of children with the racial stereotypes of this time period.

With a similar concept in mind, “Home From School” displays two black boys and one white boy walking home from school together in matching uniforms. These images convey a clear message that, despite the racial boundaries of the times, these children were free to play with whomever they wanted. Their friendships were colorblind.

Aside from his life as a photographer activist in New York City, Schwartz also photographed the daily lives of soldiers when he accompanied American troops to Iwo Jima during World War II. Placed towards the end of the gallery is an image titled “With 5th Division,” which exposes the urgency of two soldiers’ lives as they are about to release an explosive in the middle of combat.

Schwartz’s compelling images, rich with history, are a show on their own, but Smith Anderson North Gallery may be too small a venue to do his artwork justice. With each photograph telling a different story, it felt overwhelming to view so many images placed side by side on one wall.  In a larger setting, perhaps his work could’ve been better illuminated.

After spending quite some time viewing “Poems I’ve Never Written,” the meaning behind the title becomes more clear. At first glance, the images did not seem to reveal an underlying message, but that changed after becoming familiar with each scene depicted. Frozen in time for over half a century, the captured emotions behind the subjects’ faces communicate untold stories from the past.