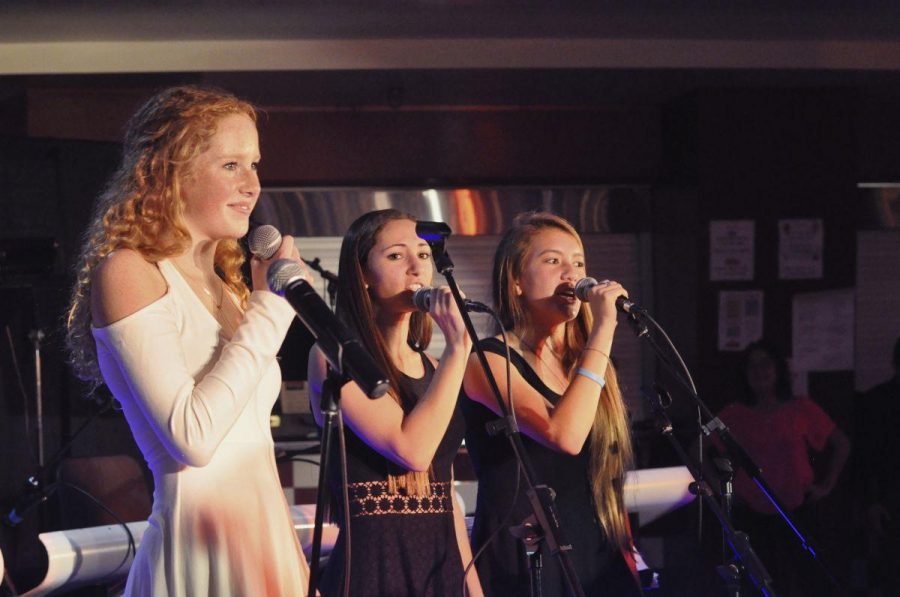 The CEA transformed into a ’60s-esque jazz night club, with twinkling lights hanging from the ceiling and a sea of students clad in colorful dress dancing in front of the stage.

According to junior Jason Seavey, who plays the trumpet in the Jazz A band and is also a member of the band Sequoia, the event was unlike most other Redwood dances and concerts because of its focus on the students as the audience.

“The reason why Night of Blues is different from all of the other concerts at Redwood is that it’s really an event for Redwood students,” Seavey said. “It’s more of a way for us to give back to the Redwood community by using what we work on [in music classes] to give everyone a fun night.”

Seavey said he believes that since Redwood’s environment is focused on academics and athletics, many people don’t have the opportunity to see what students in the art and music departments do, and Night of Blues provides a unique insight into a different type of student culture.

“It’s not exactly that [students involved in the music department] are doing so much less than sports. I think it’s just that it’s not as much in the public eye, so Night of Blues is a really great way for people to appreciate the work the music department does,” Seavey said.

Seavey said that the event also provided an opportunity for students to experience the American phenomenon that is blues style music.

“Some people say that jazz and blues are some of America’s greatest contributions to world culture,” Seavey said. “Blues is a kind of music that once you hear it, you’re like, ‘I know what that is. I’ve heard that since I was young.’ That’s a purely American thing.”

Junior Sophie Keaney, who sang at the event and is a part of both the Advanced Performance Workshop class and the Jazz A band, noted the differences between modern popular music and the blues genre.

“Blues is definitely a more expressive way to emphasize how you want to approach and go about a song,” Keaney said. “Some pop songs these days are very straightforward and have really no meaning to them, but a lot of blues songs, especially from the 50s and 60s, are really what grab your attention and make you think.”

Junior Alison Wood, who plays the trombone for the Jazz A band, said that despite the name of the event, the performers did not stick strictly to blues.

“I think it’s interesting that we call it Night of Blues because it includes so many different genres. We end up playing lots of different types of music,” Wood said.