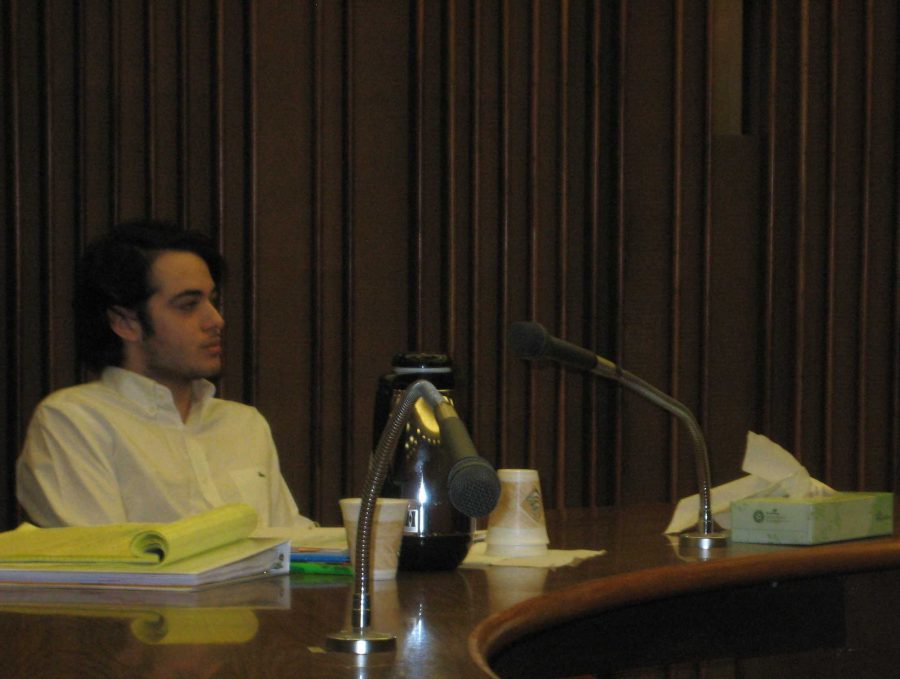 Alleged gunman and car thief Max Wade, a former Redwood student, listens to testimony at the second day of his pretrial hearing.

MARIN COUNTY CIVIC CENTER – Police testified today, Oct. 11, regarding details of the arrest of former Redwood student Max Wade, describing their pursuit of Wade through a Richmond storage complex before they apprehended him.

The nature of the arrest was among several details revealed on day two of Max Wade’s pretrial hearing as Detective Ryan Petersen and other investigators took the stand.

Wade is charged with the attempted murder of local teens Eva Dedier and Landon Walhstrom in a shooting incident in Mill Valley last April. Petersen testified today that former Redwood student Andrew Letteiri said Wade told him that Wahlstrom “had his girl,” referring to the fact that Wahlstrom was dating Dedier. According to Petersen, Letteiri said Wade told him he “wasn’t gonna take any shit” from Wahlstrom regarding Dedier.

Petersen said Wade texted Dedier on April 26, asking her to meet up with him and go for a ride. Petersen instructed Dedier to set up a call with Wade which he would listen to and record.

On the call, Dedier and Wade agreed to meet on April 28. On the 28th, Dedier texted Wade telling him to meet her at the Strawberry Village Safeway around 3 p.m. She asked him if he was coming in the yellow Lamborghini, to which he responded yes.

At CSI Mini Storage in Richmond, where investigators believed Wade owned a storage unit, Detective Brennan Collins watched a yellow Lamborghini leave the compound at around 5:30 p.m., according to Petersen.

Detectives then instructed Dedier to text Wade to cancel their meeting. According to Petersen, Detective Kevin Kershaw saw the yellow Lamborghini cross the Richmond Bridge before turning around and heading back, which police took as an indication that Wade received the message.

Petersen said Collins later saw the Lamborghini re-enter the Richmond storage unit. After the car was driven into unit SH152, Collins saw Wade peek out of the locker and then proceed to stay inside for about an hour. At around 7 p.m., Collins saw Wade walk towards the exit of the yard and enter a code to leave the storage complex.

Wade was standing on Parr Boulevard using his cellphone when a police car approached him at a normal speed. Petersen said that according to Kershaw, who was in the car, Wade initially approached the car as if it was his ride.

Kershaw was wearing a mesh-jersey-like raid vest with “SHERIFF” written across the chest, and he said that eventually Wade seemed to recognize the vest, causing him to turn and run. Kershaw hopped out of the car and chased after him on foot.

As Wade ran, he grabbed at his waistband, leading Kershaw to believe Wade had a gun. Wade who ran down the middle of the road until an SUV containing detectives blocked his path. Wade hesitated, allowing Kershaw to catch up.

Kershaw kicked him in the ribs, sending Wade to the ground. After about 15-20 seconds of struggling with the flailing Wade, Kershaw, Petersen and head investigator Greg Garrett were among those who seized a Glock handgun from Wade’s waistband and handcuffed the 17-year-old. Wade’s cellphone was left shattered on the ground.

The hearing will resume tomorrow, Friday, and again on Monday.