Coach resigns after more than a decade 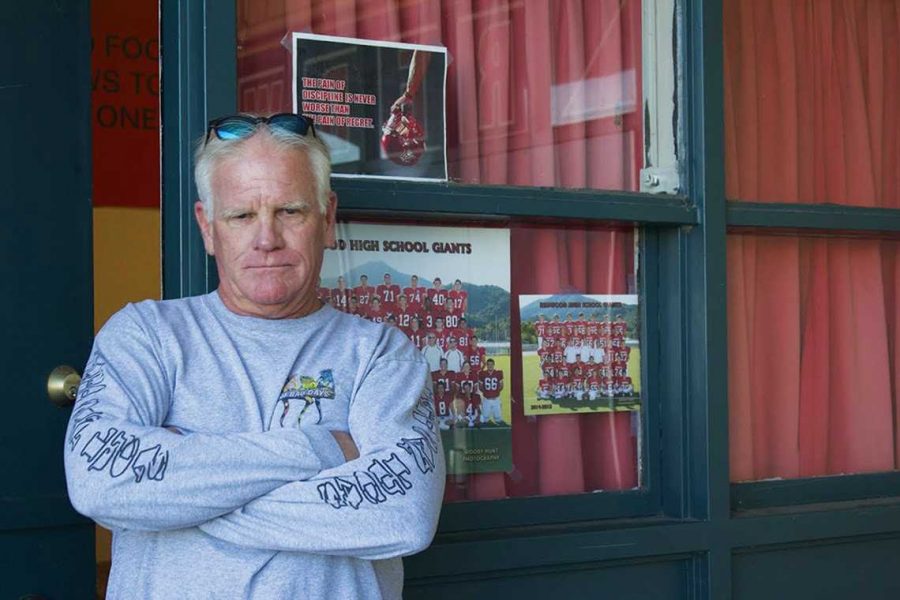 Corky Henderson poses outside of his well-known office. Henderson retired after 17 years with the Giants football program.

“I would say [the resignation] was a mutual decision between myself and the administration,” Henderson said. “I was probably the last guy to notice that it’s probably time for me to go. I love this place, I love the kids here, and it was a really hard decision to make, but I was probably putting a little more into it than I needed to.”

After serving in the Marines and drilling for offshore oil around the world, Henderson began his career with the Redwood Giants in 1998. Working his way up from a helpful parent who manned the snack stand to the junior varsity coach, he was designated head varsity coach in 2012.

Henderson is leaving a program that consisted of about 38 students when he began coaching and now includes about 137. During his time as a coach Henderson also witnessed the first student in the history of Redwood, Alex Kosinski, commit to a Division I football team with a scholarship. Considering Redwood football’s streak of disappointing seasons, Henderson said he considers the growth of the program his biggest success.

“Of course we wanted to win championships and all those things, but most importantly we wanted interest,” Henderson said. “I hope that the kids support the new guy. My message to them is that you’re not loyal to me, you’re loyal to your program.”

Jessica Peisch, the Tamalpais District Athletic Director, also cited the importance of maintaining a high number of students involved in the program.

“My hopes for the next coach is keeping the numbers up and having positive interactions between the kids and parents, and having fun out there,” Peisch said.

Peisch added that Henderson has put in an incredible amount of effort into the program.

“He definitely has shown dedication with the program. His heart and soul is out there with the football players,” Peisch said. “He puts in everything, all of his energy into these guys.”

Senior Ryan Pozivenec, a left guard on the offensive line, started playing on varsity at the same time that Henderson became head coach.

“I always really liked Coach Henderson. There is always that part of coaching where you get mad at your players and you make them run but it’s all understandable,” Pozivenec said. “He loved all of his players and after every practice every day he would say, ‘I love you guys, have a good night and do your homework, get ready for tomorrow.’”

However, Pozivenec added that some players didn’t like Henderson because of his “edgy” way of talking to students and his tendency to keep the intensity of the practice at a high level.

“I believe in hard work and practice, but sometimes I felt that the tone needed to be brought down and it wasn’t,” Pozivenec said.

As for Henderson’s plans for the future, he will be taking a year off of coaching to help a friend with talent evaluations and college recruiting. Trips to Mexico are also on his retirement agenda.