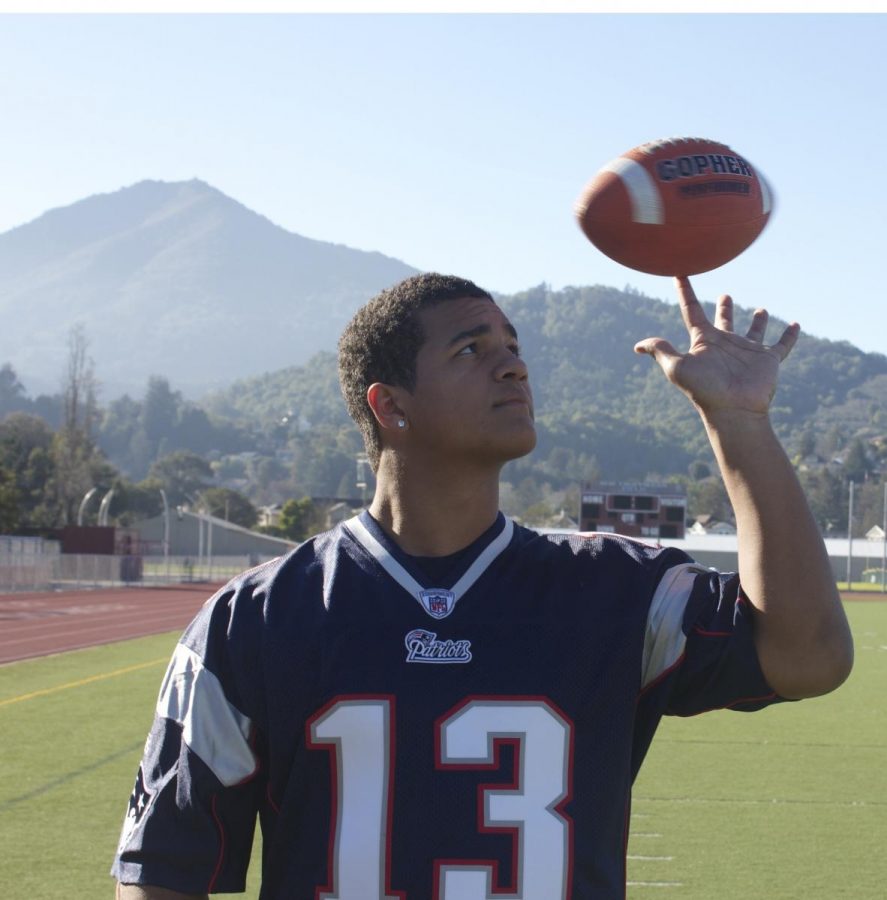 ON THE REDWOOD football field, senior Picon-Roura spins a football while wearing an authentic Patriots football jersey from his friend.

Senior Dago Picon-Roura recalls being reluctant when his parents signed him up for the local Pop Warner football team at the age of eight.

“My mom signed me up for football to learn to be more aggressive,” Picon-Roura said. “I kept telling her, ‘I don’t want to do it. I don’t want to do it,’ but as I kept playing I learned to love it. My team won championships and I made some of my best friends ever through it.”

Picon-Roura, who recently transferred to Redwood from Belmont High School in Boston, Massachusetts, made the varsity team his sophomore year at Belmont Hill. Finishing his last high school season in November, Picon-Roura had earned an impressive 49 tackles and four sacks. Along with that, Picon-Roura was awarded the All Independent School League and the All New England League for his team, as well as an All League Honorable mention his junior year.

After finishing football season his senior year, Picon-Roura moved to live with his father in California.

“My dad and my mom split up when I was younger and my dad moved out to Corte Madera,” Picon-Roura said. “My mom said that now that my high school football career was over, if I wanted to move out to live with my father I could. I thought it would be a good experience, so the week after my season ended, I packed my things and moved out here.”

And to Picon-Roura’s surprise, Ryan Kelley, Picon-Roura’s best friend and teammate who moved from Massachusetts to California over the summer, also happened to live in the same area and currently attends Marin Catholic High School.

“It was crazy when I heard [Picon-Roura] was moving out to here,” Kelley said.Similar in size, stature, and skill, these two best friends played as defensive ends their junior year when their football career took off.

“It was my most memorable year playing defensive end,” Picon-Roura said. “Ryan and I realized we could easily do D3 and tried our hardest to do D1, and we both ended up with some pretty nice offers from D1’s.”

Kelley played as running back and defensive end his senior year at Marin Catholic and has committed in the fall to playing football at Cornell.

“Dago is a tough kid. He’s one of those players that will just leave it all out there on the field. No matter what the scoreboard says, he’ll keep playing his hardest even if they know they’re not going to win,” Kelley said.

Unfortunately for Picon-Roura, the college recruitment process didn’t start out smoothly, with injury playing an unexpected factor in his future.

“My junior year, I felt a weird ball in my knee, and it turned out to be a piece of bone that had chipped off,” Picon-Roura said. “I was able to wait to get it removed, so a week after the season ended, I went in to get surgery, and in hopes of a quick recovery, my knee got infected.”

Picon-Roura was in the hospital for two weeks and dropped a total of 30 pounds, going from 205 to 175 lbs.

“The doctors said I was lucky I wasn’t in any worse condition because of how bad the infection ended up being,” Picon-Roura said. “In a five month recovery unable to do anything with my leg, I just lifted upper body.”

Instead of maintaining his health and training for the off-season, Picon-Roura had to completely start from scratch after surgery.

“I was in terrible shape, and I did what I could and went back to all my football camps just being 100 percent in terms of strength and cardio,” Picon-Roura said. “Sometimes it hurts a little because if my knee didn’t get infected, then I might have gotten looks from better colleges, but I’m happy with what I have. I don’t regret anything.”

Picon-Roura plans on making a decision in the next two weeks on where he will play collegiate football.