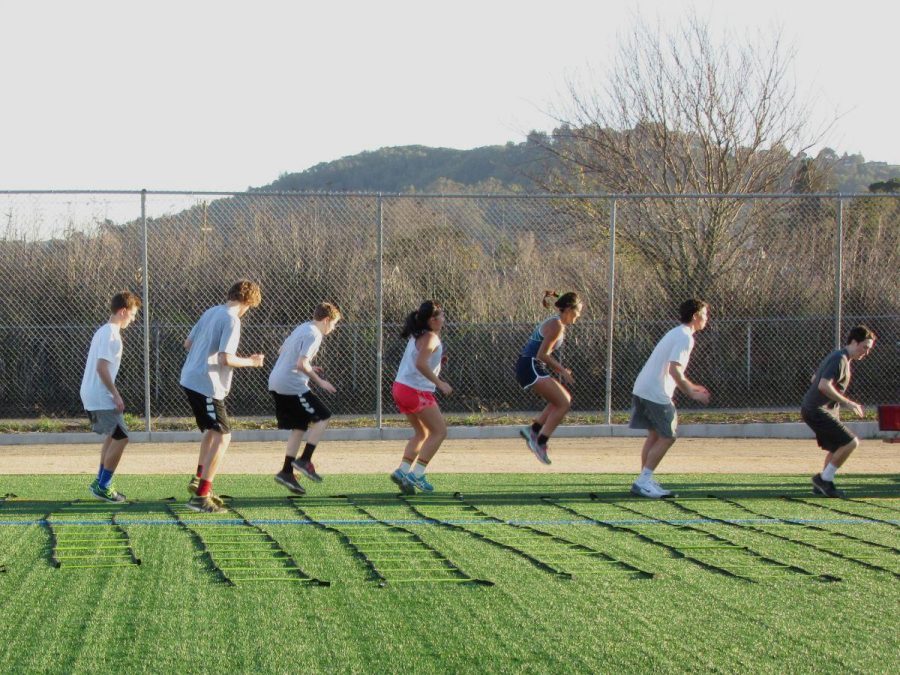 With the winter sports season more than halfway over and MCAL playoffs less than a month away, student athletes who transferred from a different school this year are finally beginning to compete with the rest of their team.

Students who transferred from one school to another used to have to wait for a whole year before playing on a sports team for their new school. However, as of June 2012, the California Interscholastic Federation (CIF) changed its state-wide rules. Now, only varsity transfer athletes have to wait until a certain date predetermined by the CIF to compete with the rest of their team.

This rule was implemented to discourage students from transferring schools solely for the sports teams and to prevent the recruitment of athletes from other schools.

“[CIF] wants us, especially public schools, to be community based. Who we have is who we get. We don’t go out and [recruit] anybody,” Peisch said.

Senior Phil Winnick transferred to Redwood from a boarding school in Pennsylvania at the beginning of this year. A varsity lacrosse player, he will have to wait half a season before participating in games.

“I’m not really sure whether the rule is effective or not, but I understand that it’s more for schools around here. [It discourages] transferring just because someone has a better team,” Winnick said. “That’s pretty understandable, I think. You can’t be transferring school just for sports, but I don’t think it’s necessary for my situation.”

Shanna McCullough, a junior who transferred to Redwood at the beginning of her sophomore year, played junior varsity basketball and lacrosse without having a sit-out period, even though she had been on the varsity lacrosse team at Marin Catholic.

“No one really [transfers for sports] anymore; you have to like the overall school,” McCullough said, adding that she felt that, because of the

rule, she was placed on the JV team instead of the varsity team.

Peisch explained that the rule only affects those playing on varsity because those teams are the only ones that go to playoffs, and CIF wants to prevent recruiting for those teams specifically.

“Limited eligibility says you can only play JV in regular season and you can’t go post-season varsity, but there’s no sit-out period. It’s just a matter of turning in the paperwork and getting it signed,” Peisch said.

Junior Monica Sears, who recently transferred from Drake, said that although the sit-out period can be tiresome, she doesn’t mind having to wait before competing.

“By the time I decided to transfer to Redwood [from Drake] I really, really wanted to switch schools,” Sears said. “But this sit-out period is kind of inconvenient, because you’re really excited to start at a new school, but you can’t go straight into your sport. But because I had that desire to come to this school so much, the sit-out period definitely seemed worth it.”

She, too, understands the reasons for having the rule, but believes that it should be shortened.

According to Peisch, each student’s sit-out period depends on their situation. If the student transferred because of a residency change, then all they need to do is complete a form, have it signed by the North Coast Section commissioner, and get it back to the school. Once that is done, the student can start competing.

Once transfers have been completed, they are documented and presented on a file on the NCS webpage accessible only to the schools for full transparency in transitions.

“When a kid transfers, it has to be the truthful statement of why you’re coming, if you’ve moved or are doing the sit-out period. If you do lie, then there are consequences,” Peisch said. “If you lie and you get caught, that kid has to sit out one calendar year of sports.”

Peisch added that lying during a transfer will result in Redwood having to forfeitgames.

Despite the inconveniences that the sit-out period causes, athletes are still able to train with their teams.

“It’s nice that they’re able to still get ready, so that when [they start playing in games], they’re not thinking, ‘Oh, I don’t even know half the guys on the team because I’m new.’ So it’s nice, they get that build-up, they get that team environment, and then they can contribute to the games after [the sit-out period],” Peisch said.