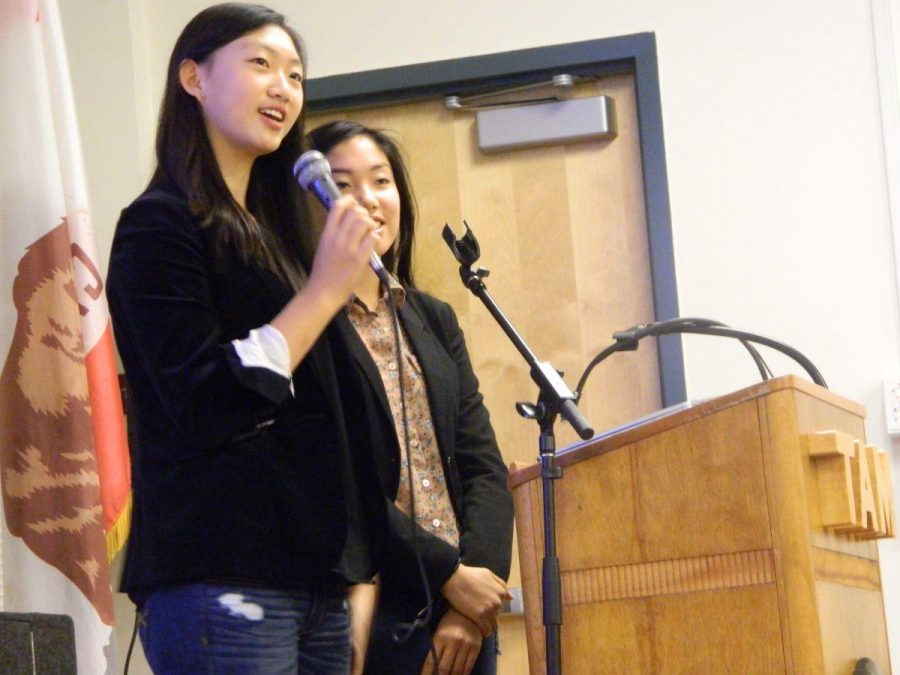 Co-presidents of Amnesty International Leah Jun and Lilly Kane-Darci speak to the audience during the dinner on Dec. 10.

Students, staff, and parents arrived at to eat dinner while they listened to sophomores Megali de Bruyn and Alexa Mizenin and junior Bailey Coleman speak about their campaigns advocating for the justice of victims whose human rights have been violated.

De Bruyn’s campaign promotes safety for residents displaced by the 2010 Haiti earthquake. Mizenin’s campaign raises awareness about the story of the43 missing students in Iguala, Mexico who are believed to have been handed over to a drug cartel by the mayor of their own town and then killed. Coleman’s campaign advocates for the freedom of a young woman in Iran, who was incarcerated for attending a volleyball game.

“The event educated me about a lot of things in the world I didn’t really know about,” said attendee and sophomore Francesca Padilla.

Other appearances during the event included guest speaker Isabel Farga, whose father was freed in Chile by Amnesty International, as well as musical performances with Kiana Melendez singing Marvin Gaye’s “What’s Going On,” and John Lennon’s “Imagine,” while sophomore Alberto Deleon played guitar. Deleon also shared an piece of slam poetry he wrote about human rights.

Towards the end of the night, guests were encouraged to sign petitions and draw a candle on students’ campaign posters to show their support for the suffering victims. Donations and ticket sales all went to Amnesty International.

“I thought the event was very well put together,” senior Alex Deleon said, who was there in support of her brother Alberto. “It was very inspiring.”