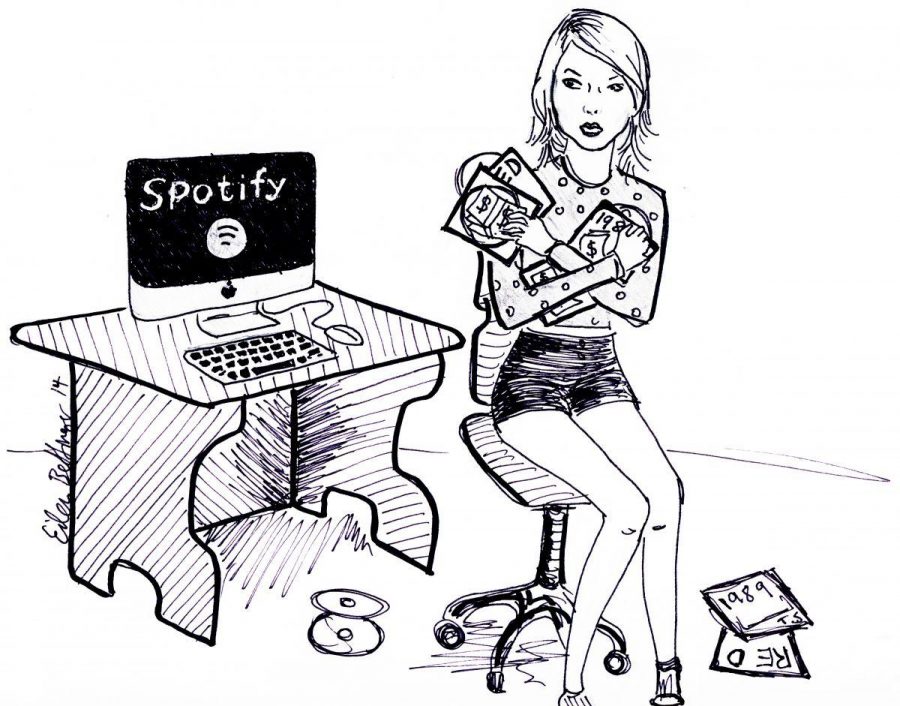 In early November, Taylor Swift removed all of her albums from Spotify, an online source for streaming music. When Swift took her music off of Spotify, it initially seemed as if she was standing up for other artists.  She also explained that she made the decision because Spotify’s business model was not compensating artists in a way that valued their work.

Swift’s decision wasn’t necessarily wrong, but the way she handled it didn’t accurately reflect why she actually made her choice. In reality, Swift’s bold move was not a moral stand against Spotify. Instead, it centered around one thing: money.

It’s important to remember that Swift’s decision wasn’t a matter of right and wrong––every artist should have the right to distribute their music in the way they choose.

However, Swift argued that she took her music off of Spotify because musicians no longer demand their worth and are instead essentially giving away their music for free. In July, Swift wrote an op-ed piece for the Wall Street Journal where she explained that by striking deals with free music platforms, music artists are not gaining the revenue they deserve.

“In recent years, you’ve probably read the articles about major recording artists who have decided to practically give their music away, for this promotion or that exclusive deal. My hope for the future, not just in the music industry, but in every young girl I meet…is that they all realize their worth and ask for it,” Swift said in an op-ed for the Wall Street Journal.

She failed to recognize, however, that an artist distributing their music through a service like Spotify is another way of placing a value on their work. Because many unknown artists have trouble getting recognition through mainstream music sources, alternative free streaming outlets can allow them to appeal to a larger audience.

Swift justified her decision with the idea that artists need to revert to more traditional music distribution systems in order to get the proper appreciation of their work.

However, this implication is problematic because services like Spotify can actually be beneficial to a different demographic of musicians, such as those who produce their music independently.

While the most popular artists can make large sums of money selling their music through more traditional outlets such as iTunes, Spotify can be helpful to musicians who aren’t as well known or who earn an income through live performances. Spotify is useful because it exposes the artist’s music to a wider range of listeners than they would receive from selling their music through more traditional outlets. In addition, it shows the musicians who is listening to their music and where, information they can use when planning to go on tour.

Swift’s assertion makes it seem like her ideas for music distribution are superior to those of other musicians. While a more traditional album-selling business model may prove successful for the most famous musicians, this style of music distribution only benefits artists who have enough demand to still be profitable.

In truth, the decision to take her music off of Spotify was economically wise for Swift because she can make more money selling her music through iTunes. Taylor Swift ultimately took her music off Spotify because it was what was best for her financially, but she tried to present it as a choice she made to exemplify what she believes to be best for others.