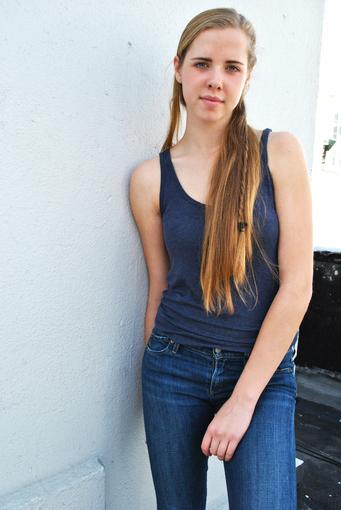 In seventh grade,  junior Erin O’Connor was chasing down her dog in Woodland’s Pet Food and Treats when she was approached by the scouting director of Stars Model Management, Kristen Kotik.

When O’Connor brought the idea of modeling up to her parents, they were tentative to let their daughter join the modeling business, but after two years of attempted persuasion, O’Connor got her parents to concede. At the beginning of her sophomore year, O’Connor signed her contract with Stars Model Management, a modeling agency located in San Francisco.

In the past year, O’Connor has walked in five fashion shows and participated in six photoshoots.

“I prefer [the] runway by far,” O’Connor said. “In runway [shows], you get up there and do your thing and it feels awesome.”

O’Connor walked in her first fashion show on Oct. 11, 2013, at the Global Green USA’s 9th Annual Gorgeous and Green Gala, and on Oct. 10 of this year, O’Connor walked at the same show, an event attended by celebrities such as Vanessa Hudgens, Austin Butler, and Paul Hipp.

Before a show begins, there is a lot of prep work involved.

“For the show I did on Oct. 10, I had to be there seven hours earlier because it takes a while to get everything started,” O’Connor said. “We had to get our outfits on, makeup done, hair done. We then have to practice down the runway a couple times, so we know where to stop after coming back. We practice in our heels and they give us tips on how to walk and we get more critique.”

O’Connor said one of her favorite parts about modeling is the opportunity it provides to meet new people.

“I always look forward to auditions and shows because it is really fun with the girls I meet, and we actually become really good friends,” O’Connor said.

O’Connor’s participation in shows and photoshoots has raised her awareness about the large emphasis placed on physical looks in the modeling business.

Because the directors at photoshoots and runways are looking for a specific “look,” O’Connor said that she often feels like a prop because she is judged solely on her looks.

“People at shoots and runways don’t bother to learn your name,” O’Connor said. “They will call me blondie because of my hair color.”

When O’Connor was first scouted, her parents were concerned that modeling would affect her self-confidence and increase the potential for eating disorders that often come along with modeling at a young age.

However, when her family met with one of the directors of Stars Model Management, they were assured that most girls at Stars do not develop eating disorders.

O’Connor, however, has seen many models at shoots and runway shows who are unhealthily thin.

“Often times when I’m at an audition or something, I will look around and see how I compare to the other girls size wise and height wise, which does make me self conscious, because some of the girls are just so small and skinny,” O’Connor said.

Along with balancing school and modeling, O’Connor participates in track and field and plays competitive beach volleyball.  O’Connor said she has to frequently miss track practices and meets because modeling takes precedence over her other extracurriculars.

“Sometimes, when the fittings are after school, I have to leave school early to get to the city by 3 p.m. The fittings sometimes take five hours or they could take seven,” O’Connor said. “By the time I get home, I haven’t started any of my homework.”

O’Connor spends hours at fittings trying on dress after dress while directors discuss what they do and don’t like about the way an outfit looks on her body. O’Connor said this does cause her to feel self-conscious at times, but she realizes that being heavily critiqued is a large part of a modeling career.

O’Connor hopes to pursue modeling for as long as she can. She would like to attend college in Los Angeles and thinks it would be a great place for her modeling career to really take off.

“[Modeling] pays incredibly well,” O’Connor said. “As of now, I have a lot of money saved for college. It would be a fun thing to continue.”