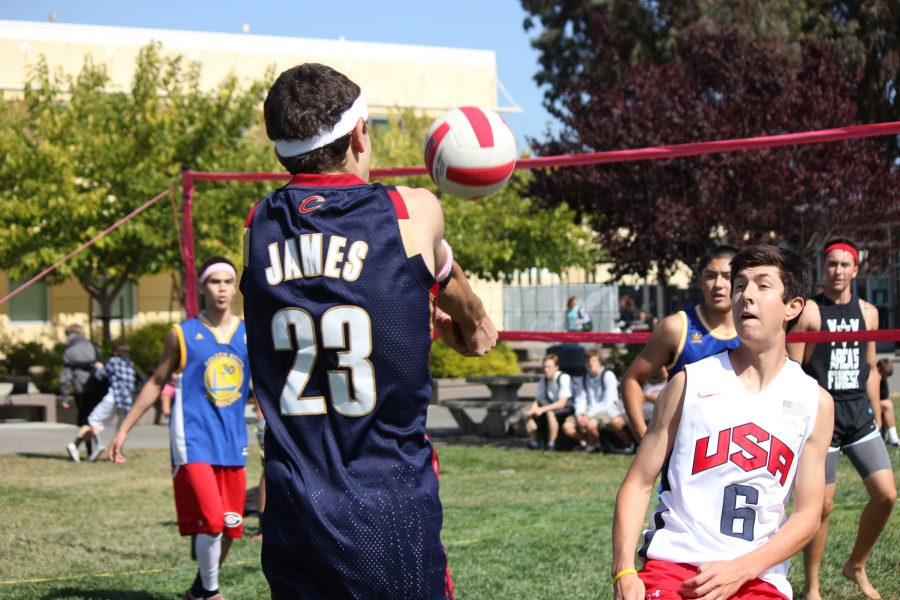 It was an unusually windy lunch period on Thursday, Oct. 4, but that didn’t stop the Bomb Squad and the Pinnerz – the two teams competing in the lunchtime volleyball competition semifinals – from playing their hardest.

Despite a rough start, the Bomb Squad beat the Pinnerz 45-39, and will move on to the finals on Monday, Oct. 8.

Although the Bomb Squad was favored to win over the Pinnerz, and had already beaten them before, the game was neck-and-neck for the first half. Just after halftime, the Bomb Squad took their first lead – 23-22 – and kept the advantage on their way to victory.

According to referee Mike Dibley, both are experienced teams that played in last year’s tournament.

Seniors Mitch Thompson, Joe Compagno, Will Finnie, Tyler Jackson, and Jack Elton formed the Bomb Squad during their sophomore year and have played together for two years. Playing for the Pinnerz were juniors Nick Tarantino, Jack Bronson, Brendan Flynn, Peter Kennedy, and Matt Pelfini, who have also played together before.

“Teams evolve over time,” Dibley said. “They may have improved this season, but the real growth has been over the years.”

Dibley also said yesterday’s game was one of the most intense he has reffed.

“Every year when we get to this round it gets pretty intense and competitive,” he said, “but this may be one of the most competitive match-ups we’ve ever seen.”

The Bomb Squad will play the winner of today’s match on Monday in the finals.