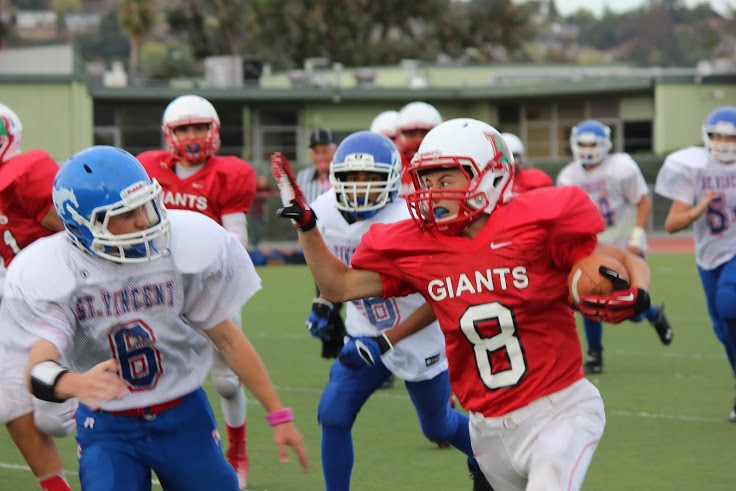 The second quarter was pivotal for the Giants, who scored on a 32-yard run by sophomore Adam Powers and a 20-yard pass from sophomore quarterback Trevor Foehr to sophomore receiver Hayden Blum. The pass to Blum came minutes after Powers’ run and gave the Giants a lead they would not relinquish due to their defensive strength.

Midway through the third quarter, Foehr threw a deep ball down the left sideline that was hauled in by Blum at the St. Vincent 12-yard line. On the next play, sophomore running back Drew Dawson ran the ball in from 12 yards out to give the Giants a 20-0 lead.

Foehr said that he was confident Blum would come down with the ball.

“I was looking down field and I had faith [Blum] could catch it, so I just threw it up there,” Foehr said.

Besides the major pass plays, the Giants’ offense relied mainly on a running attack led by Powers and sophomore Declan Hardiman.

The Giants’ defense set the tone for the game early by forcing turnovers on St. Vincent’s first two drives.

Led by linebacker Gus Buddie and cornerback Dixon Aguero, the defense held St. Vincent scoreless until late in the fourth quarter when the Mustangs scored on a long run.

St. Vincent’s attempt at a final comeback was thwarted when their onside kick attempt was recovered by Redwood lineman Justin Bae with four minutes left.