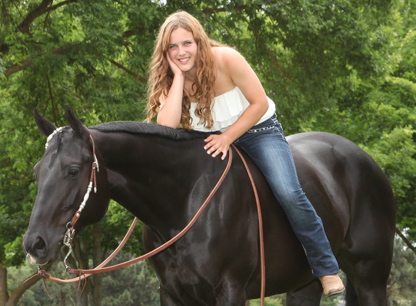 “When I was five, my grandmother told me there was a barn near my house, so my family and I went to go check it out,” said senior Madison Nirenstein, recounting her first

horseback riding experience. “We showed up and I started crying, but my parents told me I had to get on the horse because they had already paid for summer camp there, so I rode the horse, and from then on I never wanted to stop.”

Ever since that moment, Nirenstein has dedicated her life to horseback riding and horse showing.

“It’s my passion,” Nirenstein said. “It’s just something that’s always been important in my life. Going to horse shows and actually performing and showing what you can do in hopes of winning is a lot of what motivates me.”

Nirenstein has been competing in horse shows since she was eight, and throughout the years she has amassed more than a hundred ribbons and trophies from trail, hunt seat equitation, and horsemanship events, among others.

“It’s a lot of work,” Nirenstein said.  “I have a horse trainer who takes care of [my horse] during the week and I feed it, ride it, and bathe it Saturdays and Sundays for five to six hours. ”

During sophomore year, Nirenstein decided to transfer to Tamiscal so that she could spend more time horseback riding.

“That didn’t turn out well for me,” said Nirenstein. “I missed the social aspect of Redwood. There was hardly any class time and I didn’t get to see my friends very often. I originally thought I could pick when my classes were to help me allot time at the end of the week for horse shows, but that wasn’t the case. Going back to Redwood ended up being easier.”

Nirenstein said that preparing for a regular show normally takes two weeks of practice, but it takes about a year of practice to prepare for World Championships in Oklahoma.

Last year Nirenstein qualified for World Nationals, but failed to make the cut, which consisted of the top thirty riders out of 196 entries.

“I did well, but there was stiff competition,” said Nirenstein. “I’m qualifying this year again to make the finals.”

Even after more than 10 years of horseback riding, Nirenstein still finds the sport compelling.

“The connection with my horse is my favorite part about horseback riding,” Nirenstein said. “When you train with a horse, you basically begin to know what they’re thinking and they begin to know what you’re thinking, so eventually when you train with them for a while, you get to know each other and it gets a lot easier to perform. The connection with a horse is really special.”