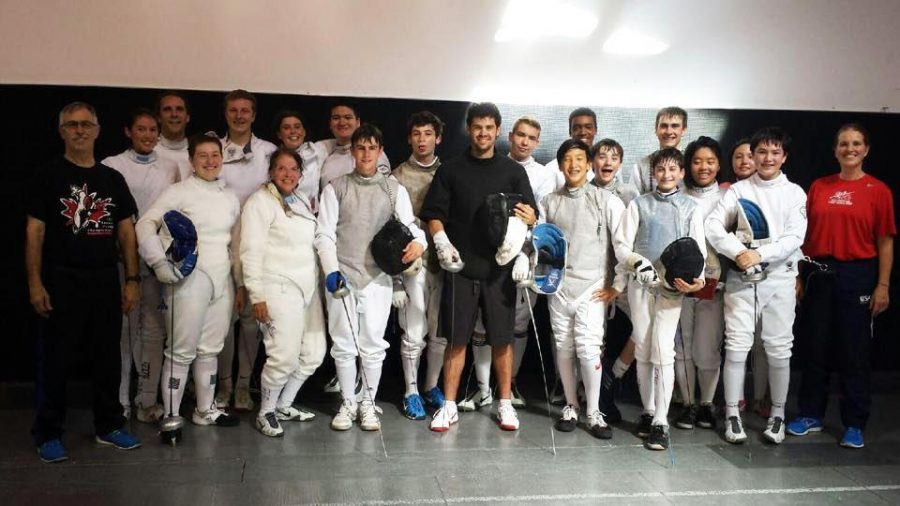 Cameron Sullivan, fourth from the left in the top row, poses with his fencing team.

As he traveled to Portland, Oregon, for the fencing Junior Olympics in February, senior Cameron Sullivan remembered why he travels all the way to San Francisco after school every day.

Decked out from head to toe in his all-white uniform, Sullivan drives to Golden Gate Fencing Center where he practices five days a week to prepare for his upcoming fencing tournaments.

Sullivan placed 16th in the North American Cup in his division and 15th in the Junior Olympics after losing 15-14 to the second place finisher in overtime.

Although fencing is rarely displayed on television, it is both an Olympic and National Collegiate Athletic Association Division I sport.

Sullivan feels that the general public is undereducated when it comes to the sport of fencing.

“It’s kind of confusing to talk about because people don’t really understand that much about the sport,” Sullivan said. “When I say I like fencing people are like, ‘Oh! Like the Three Musketeers? Do you whack people?’ No, that’s not it at all.”

According to Sullivan, last year’s Fencing National Championships had more than 300 participants in the under-20 age division.

“First, a tournament starts off with all the fencing competitors in the same arena. Then it is time to decide who ranks where,” Sullivan said.

“Everyone is grouped with five or six other people in a pool and you fence them each five touches.”

Sullivan said in order to gain points during a fencing match, he hits the opponent using only the soft tip of his sword aimed at any part of the opponent’s body.

Sullivan said that the stakes are high in every competition.

“Fencing is ranked like NCAA basketball where you have a direct elimination,” Sullivan said. “If you don’t win your battle in the tournament, you’re eliminated.”

Aside from practicing regularly and participating in local tournaments, Sullivan travels the world to compete.  He recently traveled to Sweden to compete in the Cadet World Cup Fencing Tournament, where he placed 70th out of 200 competitors.

“It’s so much effort and concentration put into such a short amount of time, so, regardless of whether you win or lose, it just feels very good,” Sullivan said.

Fencing has been Sullivan’s favorite sport since he was merely seven years old.

Sullivan felt he was a natural at the sport since he first experimented with it as a youth.

“I was so little,” Sullivan said. “I just got into it right away like it was sword fighting.”

Sullivan has decided to continue his fencing career in college and is currently aiming to get recruited to a Division I fencing team.

“It feels empowering to know what I want to do at such a young age,” Sullivan said.