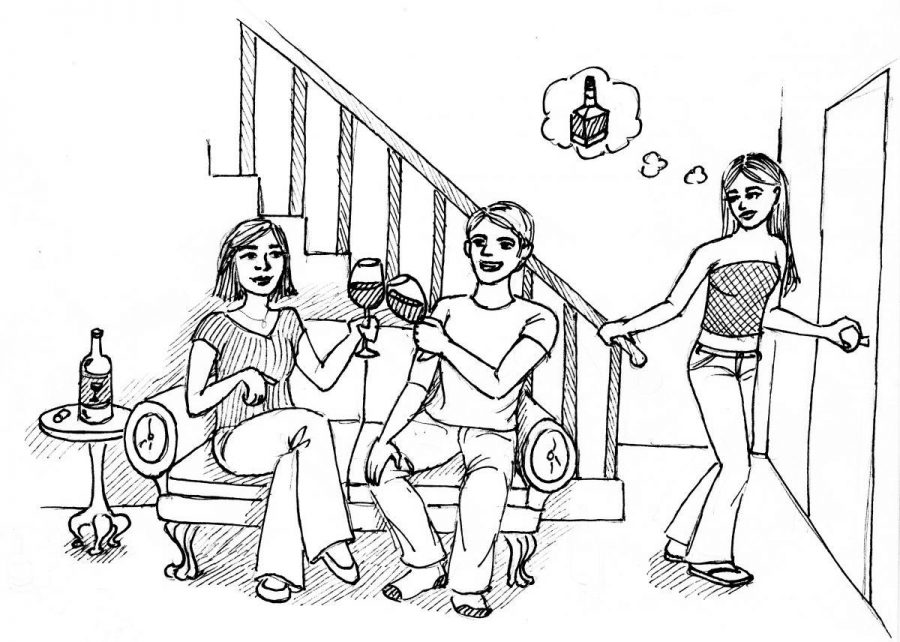 It’s a balmy afternoon and the local pool is crowded with families. Children float in the shallow end while their parents sit at the edge of the water, cocktails in plastic glasses next to them on the sun-warmed concrete. They’ll probably have another round of drinks or two before they leave.  Maybe it’s five o’clock somewhere, but it’s two in the afternoon in Marin.

It’s a warm evening and the Little League baseball fields are teeming with activity. Amid the crack of a ball on a bat and the shout of a teenage umpire, parents watch the game from the bleachers. They cheer for their children and chat between innings, sipping wine that somebody brought in a cooler.

It’s a crisp Monday morning and students sit in class talking before the bell rings, recounting the past weekend. There was a party, a trip to In-N-Out, and—it almost goes without saying—a fair amount of alcohol consumed along the way. After all, casual references to drinking are common at Redwood, despite efforts from the administration and the community to curb underage consumption.

It’s no secret that Marin’s binge-drinking and teen drinking rates are severe. The county’s rate of excessive drinking is three times higher than the national average, according to data from a 2012 Marin County Civil Grand Jury report. Moreover, the report noted that one-third of Marin 11th graders binge drink.

Communities and researchers alike often pose the question of what influences teen drinking in Marin.  Is it pop culture?  Peer pressure?  Poor law enforcement?  It seems that a large contributing factor may be closer to home—or in a home with parents who drink irresponsibly.

When parents casually but frequently consume alcohol in front of their children, they may inadvertently convey that drinking alcohol is necessary to have fun.  Whether it be at the pool or at the baseball field or in their home, Marin youth are routinely exposed to habitual drinking.

While a beer at a child’s birthday party or baseball game may seem harmless, it can subconsciously impress upon children the idea that alcohol is necessary to socialize or have fun.  It shouldn’t be necessary to drink when attending a school dance or a Giants game, but students drink at these events anyway, perhaps under the impression that they won’t enjoy themselves unless they’re tipsy.

If many parents aren’t able to demonstrate the appropriate times and circumstances for drinking, maybe the recent cases of teen alcohol use shouldn’t be so unexpected.

That’s not to say that parents should never drink alcohol in front of their children—when a person turns 21, they earn the right to drink as they wish.  Yet this privilege also comes with the responsibility of demonstrating safe drinking habits and self-control, especially in front of impressionable children and teens.

Having a glass of wine at the pool isn’t necessarily wrong—but parents should be aware that this behavior sends a message to children.  Drinking at a child-oriented event or in the middle of the day shouldn’t be the precedent.

If Marin parents expect their children to abstain from using alcohol—or even just to use alcohol safely—they need to start setting a better example.  If a child thinks constant drinking is simply a part of adulthood, then they might emulate this behavior when they get older.

If Marin youth are to grow up with a proper understanding of the effects of alcohol and the implications of excessive drinking, then they should be able to look to their parents for guidance—and parents should know that when they’re under the influence, their children can be influenced too.