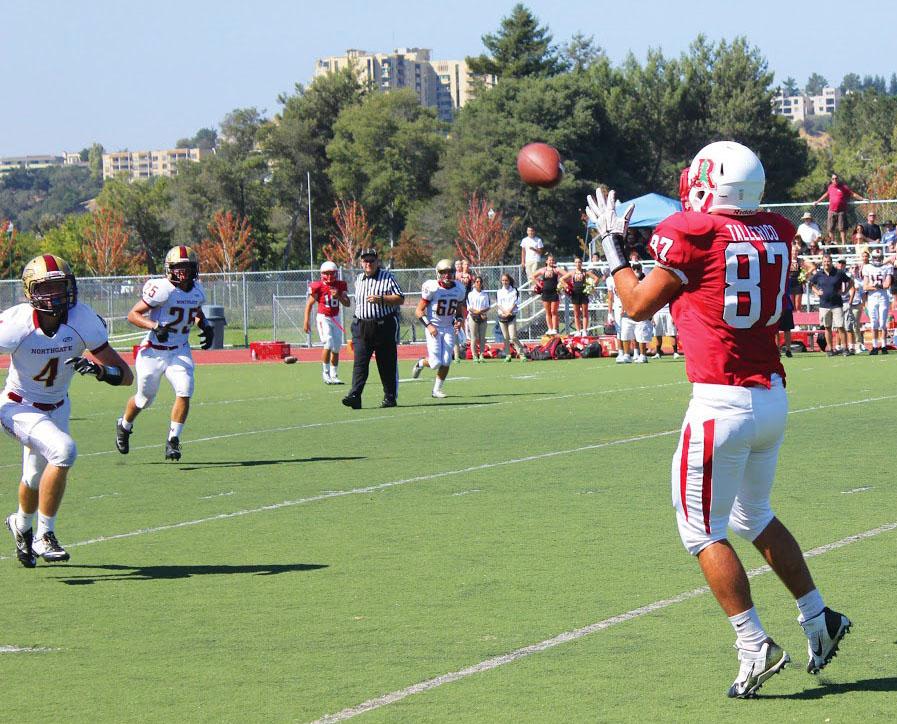 After improving their overall record from 1-9 to 4-6 last year, the varsity football team hopes to continue their uphill streak with the addition of two new assistant coaches and three strong returning offensive linemen.

“This team has a lot of attitude, and they expect to win. They’re not hoping for anything at this point. They believe that they can do it,” said head coach Corky Henderson.

According to quarterback Aaron Dorfler, the addition of coaches Brad D’Ancona and Kevin Riley will bring a more serious tone to the program this year.

“Three years ago, Redwood football was kind of a joke,” Dorfler said. “We had the coaching change, so it was a tough transitional year, and last year we had kind of an experimental season, but this year we have a strong coaching staff.”

Henderson noted that the two new coaches will transfer their college experience to the varsity athletes.

“They bring a ton of experience because both of them have played at a high level,” Henderson said. “They are Division I scholarship athletes. They know what it takes to get from playing in high school to a higher level, and they can teach the players that.”

Although former UC Berkeley quarterback and assistant coach Kevin Riley has mostly been training with the younger players on the JV team, his knowledge has rubbed off on some of the varsity athletes as well.

“I’m just trying to soak up as much wisdom as I can. One thing that [Riley] can do as a coach that other coaches can’t is that he has been in all those game situations, so he can point out the little things that I don’t notice and he can help me with those kinds of things,” Dorfler said. “He has perfect mechanics, from what I can tell, and is just a great example to have.”

Henderson mentioned specifics that the team needs to focus on.

“We want our running game to be solid,” Henderson said. “We focus on all the aspects of the game but the passing game takes a little more time to develop.”

Even though the Giants still have to work out a few kinks in their passing and running game, the team maintains one of the strongest foundations in the league with powerhouse offensive linemen Alex Kosinski, Ryan Pozivenec, and Jake Curhan.

Dorfler said that with the big shift in MCAL team standings, he feels they have a good chance of drastically improving their record and potentially winning their first NCS playoff game ever.

“The competition has leveled out,” Dorfler said. “But we can’t get ahead of ourselves–we haven’t played a game yet, we just have to take it one week at a time and just play our kind of football.”

Redwood’s strengths and weaknesses were put on display in Saturday’s 20-14 loss against Northgate High School.

On the offensive end, the Giants showed strong determination, battling back from an early first quarter deficit to pull within three points after a successful two-point conversion. The pass-heavy offense even marched up the field to tie the game with a field goal in the fourth quarter to complete the comeback.

However, dropped passes plagued the team, and they were unable to convert when Redwood needed points in the final minutes of the game.

Defensively, the squad shut down a lethal Northgate offense for much of the game, with defensive lineman Alex Kosinski even contributing an interception to the effort. Yet, the team tired later in the game, struggling to stop Northgate’s running game and allowing the game-winning touchdown late in the fourth quarter.

The Giants will have to improve their offensive execution before their game against Richmond High School on Saturday, a game they must win in order to make NCS playoffs, and potentially win their first NCS playoff game.