Club Day: What happened to the fun? 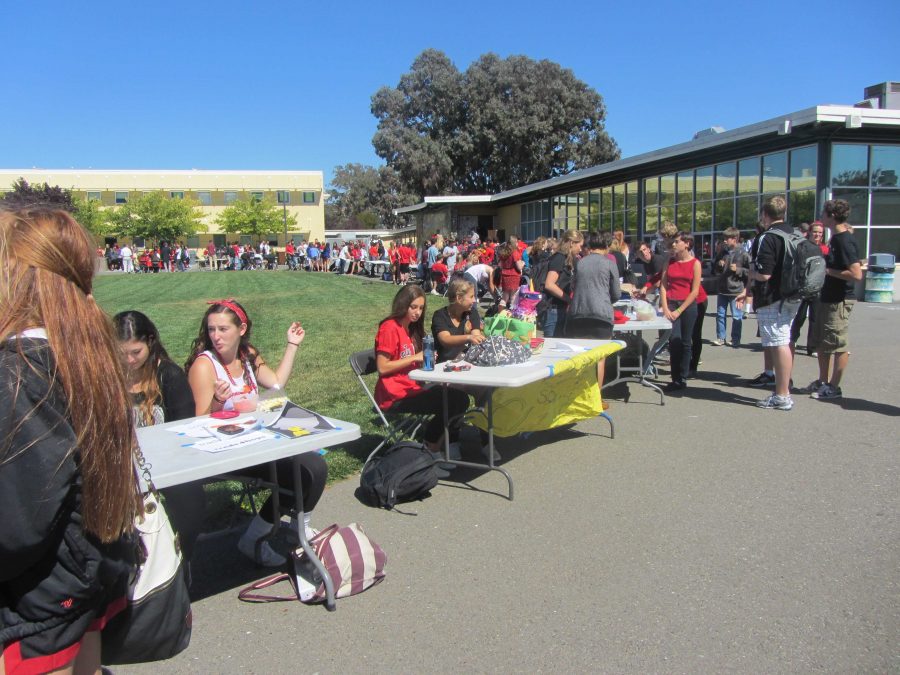 Club day offered a chance for new and returning students to learn about the various club offerings at Redwood.

As I waited impatiently for third period to end, my mind drifted off towards dreams of the day’s exciting lunch activity.

When the bell rang,I pumped my fist into the air as I shouted “CLUB DAY!” nearly spilling a burning calcium hydroxide-water solution on my hand as I dashed out of the room towards the South Lawn.

When I reached my promised land, I looked around and took in the familiar site. There were the doe-eyed freshmen stressing over what clubs would look best on their application to Harvard, the traditional volleyball game that I know nothing about, and the neatly organized Club Day tables.

Although nothing looked out of place, I couldn’t shake the feeling that something was wrong. In an attempt to dismiss my anxiety, I went in for a closer inspection of the club tables. My worries were immediately validated.

Virtual Stock Trading Club, Anti-Bullying Club, Environmental Action Club, Outdoor Adventure Club, Point of Action Club, Young Attorney Club, Modern Medicine Club… Where were all the unique clubs that I’ve come to know and love? What had happened to the Juggling Club, the Surf Squab, the Film Society, and the promised Fishing Club? I knew the answer, and it curdled my blood like spoiled milk. They had been shafted by the cold bureaucracy of the Redwood Club activation and table acquisition process that had blocked my attempt to reactivate my club from last year—the Super Smash Bros. Club.

A week earlier, as I looked at the packet that I would need to fill out in order to reactivate my club, I was shocked by the pages of forms that I would have to fill out. Taking a stand against the system, and realizing that the packet was two weeks overdue, I cast it upon the floor. “I WILL NOT DRAFT A CLUB CONSTITUTION!” I yelled at my cat in protest, testosterone coursing through my veins.

This experience reminded me of an announcement that I had heard in homeroom concerning new clubs. New clubs will have to make a presentation for Leadership to be approved. I thought about how easy it was for me to make a club last year. I simply got an advisee, filled out a quick form and, boom, a club was born. But things had changed this year—lazy people like me would no longer be able to make clubs.

So Club Day did not include a myriad of amazing clubs that I have known in my years at Redwood. I wept in a solemn eulogy for all those lazy club officers like me, and the undoubted multitude of clubs that would never know life after being shot down by the Dread Council of Leadership. Coming in early on a Thursday morning may seem like a simple task, but it’s much easier said than done.

There was more wrong about this Club Day than the new policies on creation and reactivation of clubs. I noticed an interesting trend among the clubs: there were three of the same club, and a lot more similar ones. The Interact and Anti-Bullying Clubs both have basically the same agenda: to provide students with an environment in which they feel safe. A noble pursuit, but one that doesn’t require two separate clubs. It raises the question of whether or not those club’s officers really care about their mission statement, or if they want to have on their resume that they were in charge of their school’s peer outreach club. Other clubs with noble goals may just be dummy clubs, designed to look good on their founder’s college applications. This idea makes me uneasy – I would rather see a fun club run by a group of slobs than a boring club run by diligent workers at my Club Day.