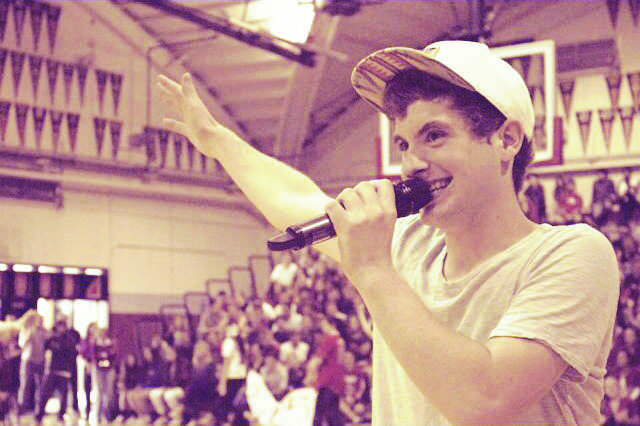 Senior Nick Lopez sings his original song, “Back in the Day,” at the Spring Rally last Thursday.

It’s not at every rally where students get the chance to perform their original music with a professional artist.

Senior Nick Lopez performed his song, “Back in the Day,” featuring the professional rapper, Catalyst, and junior Carly Butler at the rally on Thursday, May 22.

Lopez came out with his first album, Back in the Day, on March 22.  All nine of the songs in the album were co-written by Lopez and featured other artists such as Catalyst, Carly Butler, and Redwood’s sophomore Aaron Halford.

“I really like performing with Catalyst because we can vibe off of each other’s energy really well,” Lopez said.  “We are constantly making eye contact, moving, making rhythm, and we know how to connect with the crowd.”

Catalyst mentioned that he was impressed with Lopez’s and Butler’s talent.

“Especially for their age and their talent level, they’ve been really successful and have a lot ahead of them,” Catalyst said.

Not only does Lopez just record his music, but you can find various music videos and live and local performances on his YouTube channel, Nick Lopez.  Lopez has reached 60,000 hits overall on his channel.

Lopez, Butler, and Catalyst made a music video for “Back in the Day,” which has reached over 3,000 views since March 31st.

Catalyst, who has been seriously rapping for the past five years, said that since completing his first project, he has wanted to continue with this career.

“It had gotten to a point where I had a lot to say and I wanted to express myself artistically and creatively,” Catalyst said.  “I was inspired to keep going after my first project.”

According to Lopez, he has been singing since he was five years old, and plans to make a career out of it, majoring in Music Business at Cal Poly Pomona.

Lopez said that his overall goal is to get signed to a major recording label.

As a musical goal, however, Lopez said that he wants to make songs that people can relate to, enjoy, and remember.

“We always strive to make songs that stick in people’s heads,” Lopez said.