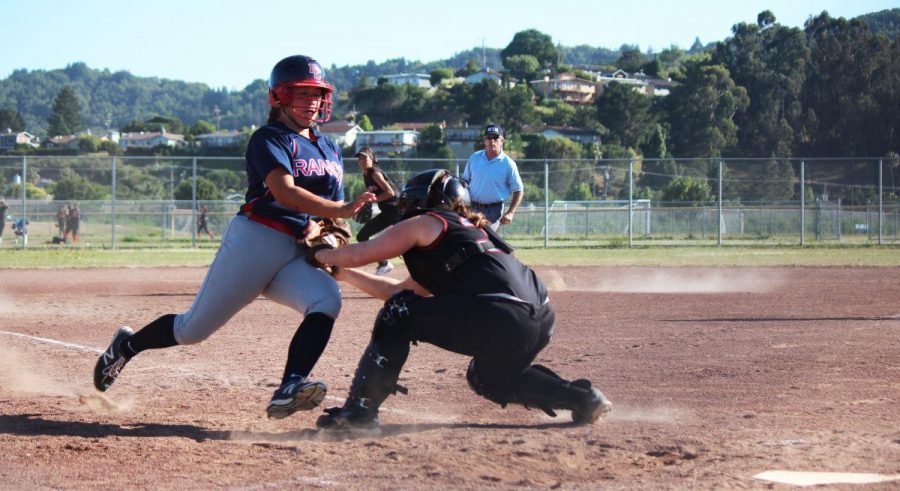 Redwood catcher Shawn McCullough applies a tag and braces for a collision at home plate in the ninth inning.

After scoring the first four runs of the game, the Giants saw the lead vanish quickly as Rancho scored six runs in the fourth inning thanks to two home runs over the right-field fence.

The teams remained deadlocked at six apiece until the ninth inning, when a blooped popup by Rancho’s number eight hitter squirted out of Eisenbarth’s glove in center field and onto the dirt of the infield. As the Rancho runner headed toward second base, shortstop Sabrina Nunez picked up the ball and fired it towards second baseman Audrey Vas. The throw, however, whistled past Vas’s glove and into right field, allowing the Rancho player to score easily and give the Cougars a 7-6 lead.

In the bottom of the ninth, the top of the Giants’ lineup failed to put together a rally, going down 1-2-3 to end Redwood’s season.

Kaleikini, who was recently named MCAL Pitcher of the year, allowed all six of her earned runs in the fourth inning, otherwise pitching a spotless game with eight strikeouts. She added two of her team’s nine hits at the plate. Nunez, an MCAL first-team selection, and Eisenbarth also each contributed two hits.

Catcher and cleanup hitter Shawn McCullough, an MCAL second-teamer, was injured on a collision at home plate in the ninth inning.