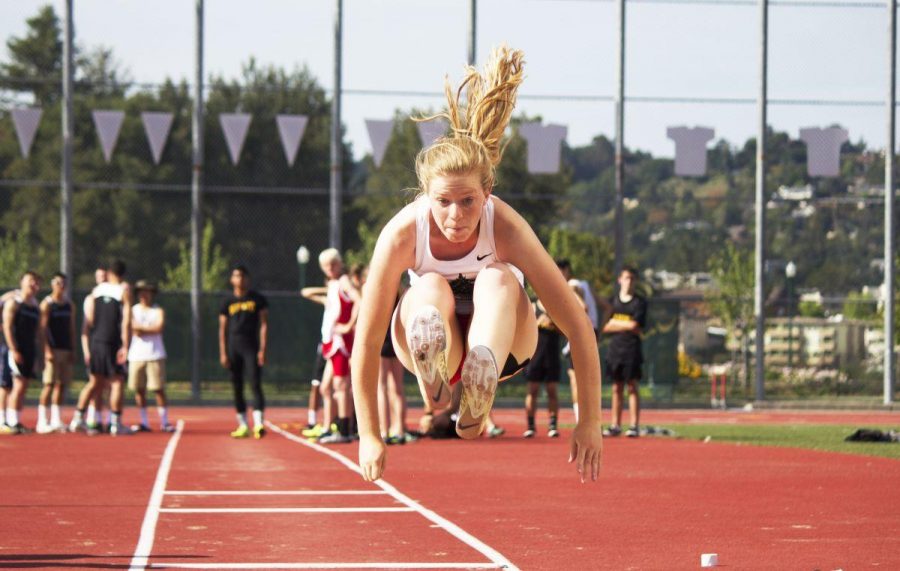 Senior Lindsay Hendrickson takes off on a long jump at an April 30 dual meet against Novato, Branson, and San Rafael.

Flying off the runway, kicking her feet up through the hot air of late spring, Lindsay Hendrickson swings her legs forward to make a 90-degree angle with her torso, a contortion which betrays her extensive gymnastics background. 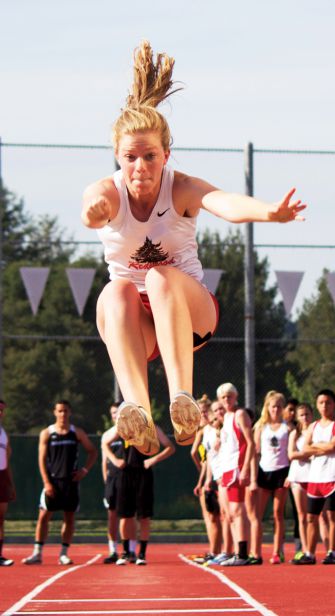 As gravity regains its hold on Hendrickson, she stops thinking, turning to a muscle memory mechanism four years in the making: the landing.

It is a style that Redwood jump coach Bret Johnson learned at the University of Oregon, where he competed in the long jump and triple jump at the Division I level.

Just as she has practiced throughout her high school career, she acknowledges her descent by flicking her heels up against the sand, swinging her back side towards the landing spot. It is a landing that, four years ago, helped a freshman version of Hendrickson add an entire foot to her long jump and that, today, has propelled her into first place among MCAL jumpers with a personal record of 17’5”.

Long jump is perhaps not even her best event. That distinction likely belongs to the triple jump, in which Hendrickson is first in MCAL with a 35’11” personal record, which is third all time for Redwood, and eighth for MCAL. Her goal for this year is at least 36 feet, a mark which she said she expects to surpass at some point over her next three meets. She is not so sure about her luck in the long jump, where she has stalled seven inches short of her goal of 18 feet.

“It’s rare to PR as a senior,” Hendrickson said. “When you’re a freshman or a sophomore, you’re getting stronger and you’re learning the new techniques so you tend to PR a lot. But I’ve started to plateau a little bit.”

How long she will continue to jump is unclear. Next year, Hendrickson will be attending the University of Michigan, where her current long jump record would place her fourth on the girls’ team.

If she is to compete at the next level, she will have to battle her small stature. At just 5’4”, she would be at least three inches shorter than any of the current Michigan long jumpers. 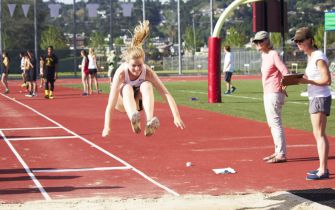 “You think long jumpers, you think they’re tall, they’re incredibly fast,” Hendrickson said. “I’m fast but I’m not as fast as a lot of the really good long jumpers. So I think it’s really the technique, which is where Bret comes in.”

When the two met, they quickly found common ground.

“She let me know right away that she was a gymnast,” Johnson said. “So she had that athletic background. The jumping, tumbling, flopping around aspect was already there.”

Like many track athletes, Hendrickson did not start training in the sport until high school. But after quitting gymnastics in eighth grade after it began to take up too much of her time, she found a sport in which her developed skills were a significant advantage.

“My parents put me into gymnastics when I was really young and it helped me with coordination, kind of the beginnings of athleticism,” Johnson said. “It gives you that athletic intelligence with your body, and you build connections and you have those epiphany moments where you figure out how you do a backflip or a landing in the sand or a long jump.’”

Four years later, Hendrickson has moved in part from pupil to teacher, passing on to younger athletes the landing style unique to Redwood among MCAL jumpers.

“She’s quiet, she’s soft-spoken but whenever I’ve asked her to help lead, help teach something, she’s able to help someone who doesn’t get it,” Johnson said glowingly. “When you can teach something to someone else, you’re starting to really master whatever it is, whether it’s mathematics or long jump.” 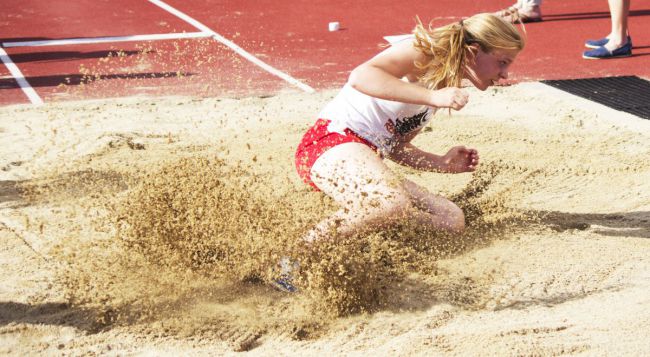