Editorial: Letters for athletes, not thespians 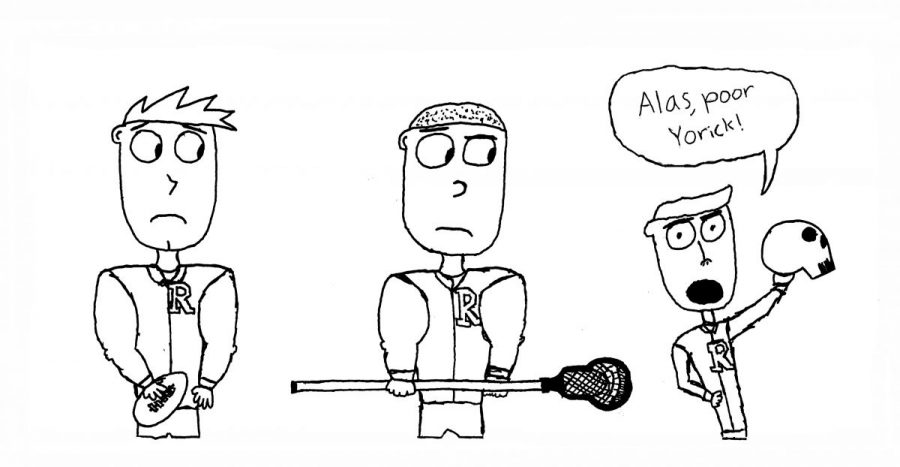 The administration’s recent decision to give Advanced Drama students the same recognition as varsity athletes was a mistake.  While the students of Advanced Drama show an admirable level of dedication to the theater, the varsity letter and letterman’s jacket are revered traditions of the athletic world. The decision to give varsity status to drama infringes upon those traditions.

The letterman’s jacket and the varsity letter that an athlete affixes to it are universally recognized symbols of athletic prowess, awarded to those who have dedicated their bodies, minds, and large portions of their time to achieving greatness in their sports. These honorifics are a testament to the sweat and tears that they have shed in order to achieve excellence in their sport. A sport is defined as an athletic activity requiring skill—often of a competitive nature.  While drama requires great skill, it is not athletic in nature, and therefore should not be grouped with sports.

One of the claims that Advanced Drama’s case rests on is that drama students compete with other schools in the same way as varsity athletes. This claim is illegitimate, because the two levels of competition are not in the same league. Varsity athletes compete in friendly, private, MCAL, and NCS matches and meets. Drama students only compete with other schools twice throughout the year—at the Lanaea and Motherlode festivals.  In the height of a varsity sport’s season, an athlete will compete in an average of one to two meets or matches a week.

Barring frequency, the type of competition is also different between varsity sports and Advanced Drama. In a meet or a match, athletes fight for dominance, pushing themselves in order to win. At the end of the day, the purpose of putting on a play is to express oneself artistically.

To infringe upon this tradition is detrimental to the pride of athletes. While the actors and actresses of the Advanced Drama class have undeniably dedicated a large portion of their time and energy to their passion, they haven’t experienced the crucible that is athletic training. Building muscle, strength, and endurance are objectively dissimilar to rehearsing a script. It should not be said that drama rehearsal is less difficult than athletic training—the work that goes into putting on an EPiC play is staggering—but the two are different.

To say that the rehearsal process demands as much from actors as training does from athletes would be correct. However, they are different. The drama rehearsal process entails perfecting one’s ability to entertain an audience through demanding repetition of lines and movements, while the training process for a varsity sport entails preparing oneself through strenuous exercise for the objective of winning in a game or a meet.

Advanced Drama students do deserve recognition for the time that they put into the theatre, and the contributions that they make to Redwood. However, the solution to this lack of recognition   is not to group actors together with athletes. Doing so just seems like sweeping the problem under the rug—throwing the drama program a bone for their efforts to receive recognition. A separate system of honorifics should be established by the administration to recognize those groups of people who contribute to Redwood in other ways. Drama, the robotics club, various bands, and other academic student organizations that bring glory to Redwood at inter-school competitions should be rewarded for their contributions, but not with the varsity letters that are a hallowed part of athletic tradition.