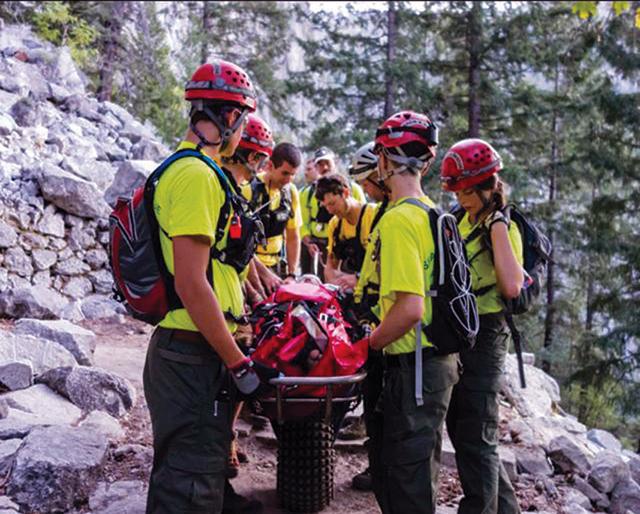 Members of Marin Search and Rescue participate in a training program in Yosemite National Park.

Redwood members of Marin Search and Rescue (MSAR) participated in the search process for two missing women on Mt. Tamalpais during the week of April 13.

Sophomores Cale Smith, Bryden Pearson, and Harrison Jantzee were not in the search group that found the bodies, but they were in other groups which searched the nearby area and they helped with the carry out.

Typically, the students are only called once every two weeks on searches. Pearson said these last few weeks may be the busiest MSAR has been in the past five years.

MSAR is one of few search and rescue programs that allows youths to become full members and participate in the same missions as adult members. Around half the team, according to Jantzee, are youth members.

The protocol for a typical search and rescue mission begins with the members receiving a message from the mission leader for that day. Each member has a MSAR email account that notifies them  and tells them where to respond–normally a scene or a ranger’s station near where a person has gone missing.

“We will be sent on a ‘hasty search’ where we cover the trials as quickly as we can, where it seems [the missing person] probably is,” Smith said. “Then once we’ve done hasty searches, we will go more into the country around the trails because a lot of times people just wander off trail and they get lost. If any clues come up, we follow those clues.”

Smith said the search for Glinkowski took five days, and he was there on the third and fourth day.

“She went missing and we had clues from a reliable source that she was down near Stinson [Beach],” Smith said. “The time period matched with what she could have hiked that day.”

Jantzee participated in three days of the search. He was assigned to search the drainage areas.

“We also had access to a camera which was helpful. We could see where she parked, when she got out, and she was equipped for a hike and stuff like that,” Pearson said. “From that, you could tell how long she was intending on going, and from that you can predict if she was going out and camping somewhere.”

Over 100 members actively searched each day, Smith said, including mutual aid from other counties. A team from Contra Costa county found Glinkowski, and the MSAR team was called for the carry out.

According to Smith, Lieutenant Pittman told MSAR that it’s likely she just fell.

Smith joined MSAR in the spring of eighth grade. After two weeks of intensive boot camp and six months as a cadet, he became a full member who can participate as often as needed.

Jantzee said there is an application process to apply to the team. An applicant must obtain an application from the MSAR website, and complete an essay and interview.

MSAR requires the members to keep up their skills by participating in Monday night meetings once every two weeks and mandatory trainings once a month,

“In addition the Monday night meetings, once a month there is a designated training day,” Jantzee said. “We go to Lake Lagunitas or something like that to practice our skills.”

MSAR also offers specialized trainings. Smith and Pearson went on a five day training trip in Yosemite last year and aided the Yosemite search and rescue in an intensive carry out of the body.

“A man with a church group slipped and almost went over the falls. We were called in since we were stationed in Yosemite to assist YoSAR [Yosemite Search and Rescue],” Smith said. “YoSAR did most of the work, MSAR just assisted with the carry out.”

YoSAR has specialized members of their team that are trained to scale cliffs for these kinds of situations.

“We have never had something like that before. It was a once in a lifetime kind of thing,” Pearson said.

One of Smith’s most memorable assignments was the time he had an assignment up at Alpine Dam with a team of search and rescue training dogs.

“The person had passed away and was found at the bottom of the lake,” Smith said. “I didn’t really believe in dog teams before that, but I was really impressed that a dog was able to smell through like 15-20 feet of water. It was crazy.”

Smith said that his MSAR training has been extensive.

“You get a whole bunch of medical training, you get rigging training,” Smith said. “It’s really specialized stuff.”

He said MSAR is a great way for him to help out his community.

“[Finding someone] is one of the most rewarding community services,” Smith said. “Even if it’s when they passed away. To bring closure to the family is really great.”