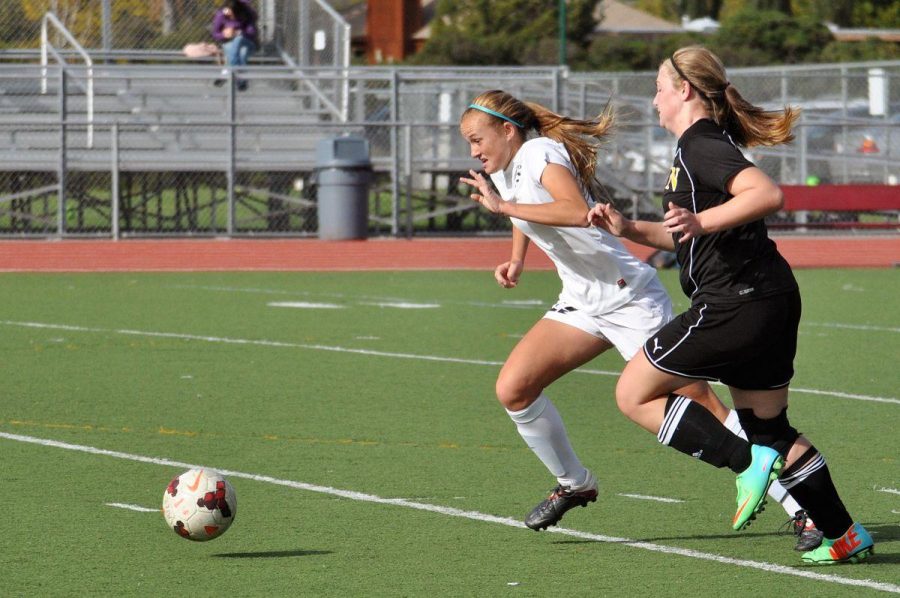 It’s an immeasurable skill with very quantifiable results. The action requires an aggressive and confident mentality that is present in nearly every championship team in every sport.

“In the majority of our games, we’ve had possession of the ball, but difficulty scoring,” said senior center back Maddie Neukranz. “Last year with Olivia, we knew there would be goals.”

The returning MCAL champions won the pennant last season in dramatic fashion by handing rival Marin Catholic only its second loss of the season in the championship game. However, the Giants (3-2-2) have their work cut out for them this year as they face improved competition across the board.

Third place Drake (5-2-1) sports one of the league’s best offenses led by junior Kendal Clare, one of the top scorers in the league. Marin Catholic (5-1-2) protects the net exceptionally well, with a league-best two goals allowed all season. And, perhaps most impressive, is undefeated Tam (6-0-2), which is ranked first in all of California, according to MaxPreps.

In order to pull off a Cinderella run similar to last year, Redwood will have to capitalize on scoring opportunities and maintain energy intensity in the second half of games. A common trend for the young lineup has been the squandering of leads late in games—a pattern that many players attribute to inexperience playing with each other and an overly confident mentality at times.

“When we are playing teams that we expect to beat, we get cocky,” Neukranz said, citing a 1-0 loss to Terra Linda and a 1-1 tie against Novato as results of this self-assured mindset.

Yet, despite the various kinks still being worked out in the Giants’ possession-focused system, signs are pointing up for the fifth-place squad as they approach the midway point of the regular season.

Not only are they currently riding a three-game win streak, but they are also reaping the benefits of the return of junior midfielder Lauren Kuchman, who scored two goals in her first full game back last week. Kuchman, an MCAL Second Team honoree as a sophomore, has been described by players as someone who could help the team’s struggles with executing shots on goal.

The Giants’ play on the other side of the ball has been a highlight for the team this season. Under Neukranz’s leadership, the sturdy backfield has only allowed five goals, better than all but two teams in the league.

If the developing team is going to make a deep run in the playoffs, Neukranz and the Redwood defense will need to continue to fend off opposing attackers. But it will be the team’s ability to put the ball in the back of the net late in games that will decide the Giants’ fate come postseason.