Learning to Cope: How teens persevere when tragedy strikes 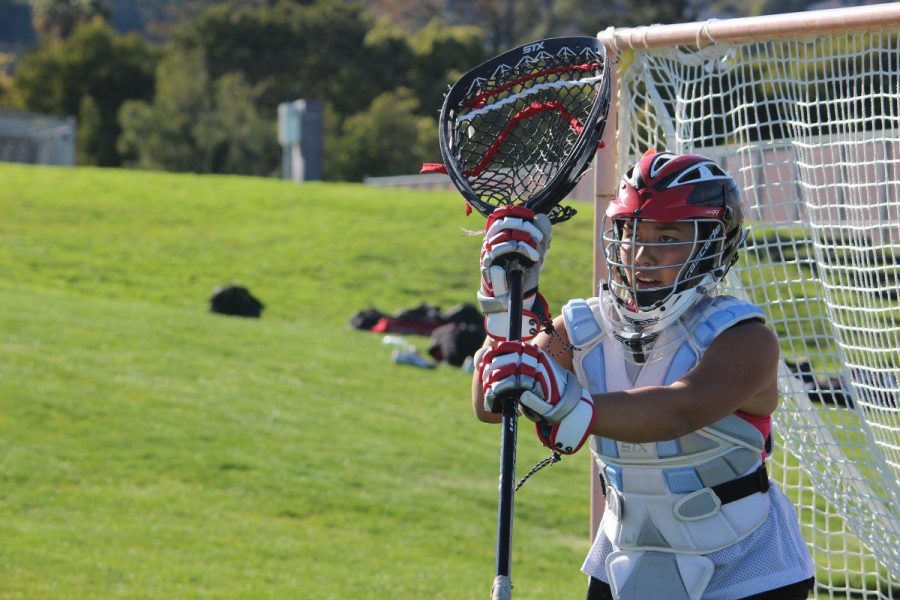 JUNIOR CHRISTINE COOK plays on the Redwood girl's varsity lacrosse team to help cope with the obstacles she has experienced.

“My dad was in his room and I told him, ‘Hey dad, I’m going over to my friends house. I love you, have a good night, and I’ll see you tomorrow.’ The next morning, on a Sunday, I came back and the shower was running and he wasn’t responding. I went in, and I just saw his body slumped over the tub.”
After tragedy struck his home, junior Griffin Wood-Smith said that the effects of his father’s death quickly impacted his life outside of home.
“I lost motivation for drumming, rugby, school work, and spending time with friends,” Wood-Smith said. “I would just stay alone and didn’t really do anything.”
For anyone going through traumatic events, coping mechanisms become a necessary means to recover.
Wood-Smith said that music helped him cope with the death of his father.
“I got this from my dad because he loved all kinds of music,” Wood-Smith said. “Whenever I felt down or depressed I would turn to music. Music was really helpful because it would just allow me to zone out and forget all of it.”
In addition, Wood-Smith said his family and friends also helped him cope with the loss of his dad.
“I have some of the best friends anyone could ever ask for,” Wood-Smith said. “We do anything and everything for each other and make each other laugh to make each other cry, to help each other out.”
With the support of his family, dealing with the loss of his father’s death became easier.
“My mom and stepdad were very supportive,” Wood-Smith said. “They gave me my space and asked me what I want instead of telling me what I’m going to do. I was very thankful for that.”
Therapist Polly Ely from Accelerated Experiential Dynamic Psychotherapy in Corte Madera explained the importance of coping for high school teens going through difficult times.
“We set up strategies to survive and keep ourselves safe when we feel really scared inside, or when something’s happened that makes us feel vulnerable. Those strategies help us stay safe enough to keep moving on in life,” Ely said.

Junior Christine Cook also faced hardships when her mom’s boyfriend Sean was found dead in the bathroom of their home.
“I was at home with him and I heard something fall,” said Cook. “I wasn’t sure what it was. I thought it might have been Sean. I called my mom and I asked her, ‘Okay, I’m hearing Sean making sounds and I heard something fall. Is he asleep? Do I need to go check on him?’ She said I didn’t need to because she was going to be home in less than ten minutes,” Cook said. “When she got home she found him in the bathroom on the floor.”
Although he lived with congestive heart failure and had been in the hospital twice in a year, Sean’s death was still a shock to her and her family.
“I was apologizing a lot to my mom when it happened because I was blaming myself for it,” said Cook. “She told me it wasn’t my fault.”
Cook said that what helped her most with her loss was keeping herself preoccupied with things such as her responsibilities at work, preparation for the Homecoming rally, lacrosse practice, and school.
“Staying busy and not thinking about it were basically the things that helped me,” Cook said.
Ely said that there are many positive strategies that can help people move on.
“I see people cope positively by things like exercise, sleeping, breathing, deep mindfulness practice, meditation, good friends, going to therapy, and learning to communicate about your feelings without getting too scared,” Ely said.
Beginning at the age of eleven, junior Alana Peters faced a different hardship — not the loss of a family member’s life, but a battle for her own.
“In sixth grade, I was having stomach pains,” Peters said. “I went to the doctor and I found out that I had popped a rib, so I had to drop all my sports. My mom took me to the out patient clinic and there, they found out that my spleen and liver were the size of [those of] a 300 pound man.” It wasn’t until after a month in the hospital that Peters found out the cause of this was autoimmune hepatitis.
“My body was basically attacking myself,” Peters said.
Similar to Wood-Smith, Peters relied on the support of her family and friends to cope with her illness.
“My friend Allie was a really good support system,” said Peters. “Even though she couldn’t really quite understand how it was like with doctors and all that stuff, she was really the one there to remind me that my life doesn’t revolve around my illness and that it’s just a small part of it. She gave me the motivation to get back to normal and everyday things. ”
Peters also received support by her parents who both work in the medical field. To Peters, this made coping with her illness easier.
“My mom was my support system really. In the doctor’s office she looked at me as her patient, but also she was my advocate,” Peters said. “At home she dealt with more of the emotional side, but she was able to put on that strong face in the doctor’s office.”
As Peters got older, she made the decision to transfer from Redwood High School to Tamiscal, where her classes could work around her doctor’s schedule, which allowed her to succeed academically while dealing with her illness. With time, Peters learned to use self-motivation to cope with her autoimmune hepatitis.
“I used my illness to define myself and eventually, I realized that I’m not my illness and the illness is just a part of my life and I just have to deal with it,” Peters said.
Peters volunteers at the gastrointestinal and hepatology department at UCSF, which has allowed her to take a positive look at life despite her illness.
“It made me realize that I had it pretty easy compared to some people.  A lot of kids were dealing with a lot worse illnesses, and were coping with it in such an extraordinary way,” said Peters. “They were so happy and loving life, and that made me realize that I have to be the same way.”