Shakira breaks out of her Latina roots with new album 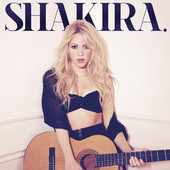 Latina diva Shakira exposes her versatility as a performer in her latest album Shakira, released Feb. 24. Ranging from her upbeat pop rock single, “Can’t Remember to Forget You” (featuring Rihanna), reggae song “Cut Me Deep,” and even the slow-paced country ballad “Medicine” (featuring Blake Shelton), the new album displays a diverse variety of songs showcasing Shakira as a naturally talented musician across genres.

Shakira also includes some EDM and a few softer Spanish tunes, as well as hints of rock. With this release, the Colombian popstar will no longer only be known for her authentic Latin American music.

Shakira starts the album off with “Dare (La La La),” a song she created specifically for the 2014 Brazil World Cup. Unlike Shakira’s 2010 World Cup anthem “Waka Waka (This Time For Africa)”, “Dare (La La La)” has a electronic dance element embedded in the music adding a modern flare to the hype of the approaching World Cup.

One song which stands apart from the rest of the album is Shakira’s rock anthem “Empire.” With harsh undertones and powerful vocals tearing into the chorus this unforgettable tune, displays a new and improved Shakira.

The two previously released singles off the album, “Can’t Remember to Forget You” and “Empire,” both show off the pop rock side to Shakira. However, they are too similar to one another and don’t represent the full range of all the album’s elements. If Shakira had chosen “Medicine,” or “That One Thing,” songs which display the singer’s new country-side, as singles, this album could’ve been more anticipated by the public. Additionally, both singles are unlike the majority of “Shakira’s” ballad-like songs, previewing a false representation of what the album may include.

Shakira’s wide range of styles is welcome, however there is one track the album could have done without. “Spotlight” embarrassingly stands out from the rest, with its childish bubblegum melody and repetitive meaningless lyrics. With the refrain, “In the spotlight, spotlight and it’s hurting my eyes because it’s so bright,” this song is a reminder that someone who has improved so much can still display a lack of originality.