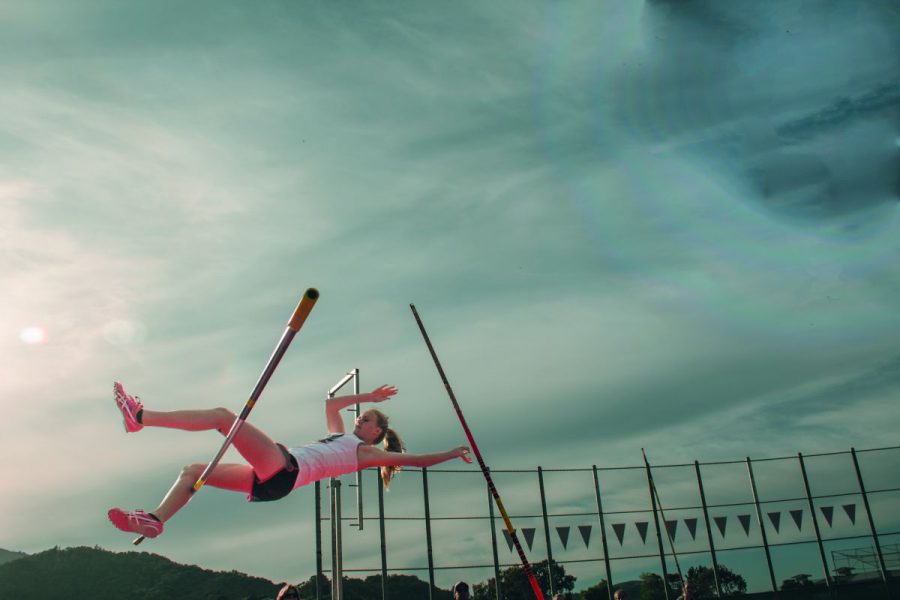 “Being turned upside down and flying up, and then falling down feels very cool,” senior Jackson Cooney said.

Currently, Redwood’s pole vaulting team has ten participants. Three of the team members have pole vaulted before, while the rest are freshmen who are new to the sport.

According to Cooney, the sudden spark of popularity is presumably due to the presence of new pole vaulting coach Karin Fisher.

“I think it is really daunting to try to do [pole vaulting] if you have nobody to tell you what to do,” Fisher said.

Freshman pole vaulter Shauna Ewry said that what sets pole vaulting apart from other sports is the thrill and danger felt when launching oneself into the air with a 12-foot pole.

“You learn how to put all your weight and trust in it, so it feels like you’re swinging on a monkey bar, but it is sideways,” Ewry said.

Fisher, a 2007 Redwood graduate, will be coaching for a short portion of the track and field season. She spent two years of her pole vaulting career without a coach, and understands how much of a difference she can make to the new athletes.

“It is a really challenging sport,” Fisher said. “There are a ton of different parts of the vault, and it is really hard to get them right if you do not have the basics down. I am trying to leave them with drills that they can do and basic stuff on the pit.”

Four year pole vaulter, Cooney, leads the team, holding his MCAL title as second best in Marin, with a personal record of 13’ 4”.  He believes part of his success comes from his dedication to the Marin Youth Track Club, where he is continuously practicing and improving upon his pole vaulting records.

According to Cooney, the hardest part about pole vaulting is that everything– including the swing, take off, and plant– takes place in a matter of seconds.

“It is pretty hard. You have to have the speed on the runway and strength to get inverted and swing off the ground,” Cooney said.

Cooney will unofficially take over Karin’s role as coach when she leaves to study in Europe next month.

“It is nice to have a coach that is advocating for me to pole vault and helps me with my technique. So in that way it is really great to have a specific pole vaulting coach and also for the new people,” Cooney said.

Fisher believes that Cooney has a lot of potential and will carry that to Claremont McKenna College, where he will continue pole vaulting.

“It is a pretty mental sport, I mean you can be physically incredibly talented and not jump very high, just because you’re scared.” Fisher said. “Even professional vaulters go through periods where they cannot even take off the ground just because they started thinking about it.”

Cooney believes that the sudden attention to the sport is due to the fact that the 20-year world record has recently been broken. The new world record was set by French pole vaulter Renaud Lavillenie at 6.16 meters (a little over 20 feet) in the Ukraine on Feb. 15.

The pole vaulting team’s first track and field meet is at home on March 20 against rivals Justin-Siena and San Marin.