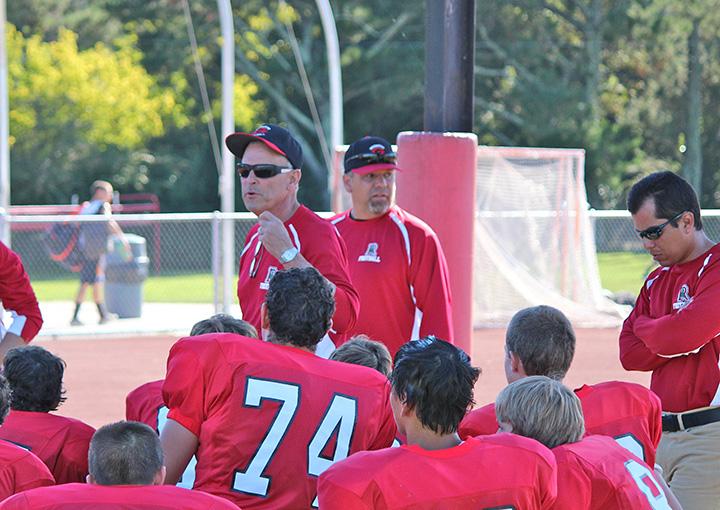 “You’re not alone,” freshman Michael Lee said about being a high school athlete. “Everywhere you go, you know your teammates have your back.”

As the new school year begins, a new freshman class is adjusting to the demands of high school sports, which include increased competition, a larger time commitment, and more injuries. However, new high school athletes say that along with these demands come social benefits.

Lee played Pop Warner football prior to coming to Redwood, and he is now on the freshman football team.

According to Lee, the competition is elevated from Pop Warner because kids are stronger and faster.

“When there’s this new level of competition, everyone is competing for that starting position,” Lee said. “Especially because the coaches now don’t know you, and you always have to be working hard to prove yourself to them.”

Volleyball player Chase Martens is another freshman athlete who sees a rise of competition in high school sports.

Martens played on both club and CYO volleyball teams prior to high school.

“It’s harder to make a team in high school because everyone wants to play volleyball,” Martens said. “You have to play well because you want to get on the better team next year.”

Andy Ehrenberg, freshman cross-country runner, used to run for Hall Middle School and a club team from the East Bay.

Ehrenberg said he enjoys running for a high school cross-country team because the competition surrounding him improves his work ethic.

“I think it’s better because I get to train with other people, raising the amount of work I put in,” Ehrenberg said.

High school coaches expect their players to have higher levels of dedication in order to play in a competitive atmosphere.

According to him, all of his players come into the season with equal opportunities to play.

“The kids who played Pop Warner before cannot develop a sense of entitlement that they are going to play because they’re going to be really disappointed,” Robbins said. “You have to work as hard as the guy next to you who has never played before.”

Robbins also said he attempts to play most of his players in order to develop their skills for varsity.

“There are kids who don’t appear to be good at 14, so as the freshman coach I need to give everyone an equal chance to

earn playing time, making some of them great players when they’re 18,” Robbins said.

“There’s a different set of parameters once you start coaching freshmen football,” Robbins said. “You are now coaching for the future of this program, so it’s your responsibility to shape a skilled future varsity team.”

Due to daily practices, freshman athletes must balance sports with a heavier workload than in middle school.

“It’s a huge commitment, which I knew coming in, but you have to play simply for the love of the game,” Lee said.

Martens also said that volleyball motivates her to work efficiently on schoolwork.

“Volleyball actually makes me balance my schedule more because I have to get my work done in a shorter period of time,” Martens said. “You have less time so you really have to focus.”

High school sports lead to more injuries due to practice and games every day of the school week.

According to Redwood trainer, Americ Alvarado, athletes are pressured to play sports year round.

“The biggest difference for new high school athletes is overuse injuries because at this level kids will play year round,” Alvarado said.

Alvarado  said  he  believes  athletes  shouldn’t  be pressured to play year round because it leads to more injuries.

Although there are hard adjustments to be made for high school sports, there are beneficial social aspects.

Lee said his bond with his teammates has made the beginning of freshman year easier.

“Everywhere you go you’re going to know people,” Lee said. “In most of your classes you’re going to have people that you know making it a lot easier to transition into high school.”

Martens said that playing volleyball has also helped eased her into high school.

“I knew some people coming into high school, but coming from a private school, I didn’t know as many people,” Martens said. “Now we’re all really good friends coming into this year.”