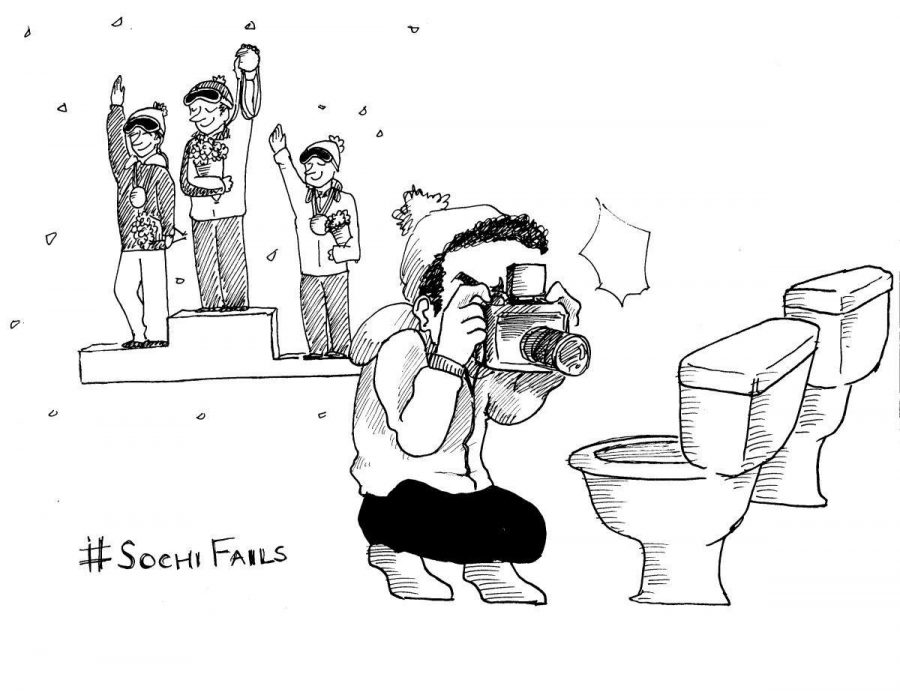 Ah, the Olympics. A time for the countries of the world to strut their athletic prominence, a time of world unity and amicable competition, and— is that tap water brown? Did that ring not open?

Scrolling down the feed of any social media provided news from the Olympics, just not usually about the athletics.

Now that the 2014 Olympics have ended, it appears that the scandals regarding Sochi as a host city have completely overshadowed the fair spirit of the Olympics, and the achievements of the athletes competing.

Instead of celebrating historic milestones made during these games, the media appeared to focus primarily on Sochi’s unpreparedness as a host city.

The problems within Sochi became undeniable as journalists posted pictures of their tarnished rooms, as stories of stray puppy euthanization leaked into the international press, and as viewers spread claims of Russia fixing certain events.

The Olympics has a long history of politics and scandal, but the amount of scandal being spread across the Internet overshadows news regarding athletic events.

Sochi’s known problems as compared to those of past Olympic games are less intense, and the achievements of athletes in these games should be acknowledged more than the scandal. Politics have become too invasive in what once was a highly regarded international competition.

Given America’s historical tension with Russia, and the passing of Russia’s controversial anti-gay law, scandal being reported by American media seemed almost inevitable. The posts spreading around all social media sites give a disproportionately intense reading on known scandal in Russia. If the absolute worst events that took place regarding the Sochi Olympics were the euthanization of stray dogs and some unprepared hotel rooms, Russia will have put on a comparatively clean olympics.

Political turmoil in the areas surrounding Sochi stood as the initial concern for the American media. With bombings in Volgograd during late 2013, reports that terrorist groups were planning to attack the games surfacing, and Sochi’s proximity to Ukrainian anarchy, safety for all those attending the games became a major concern. Despite this, no attacks were made.

This security puts the Sochi Olympics in a better light than the 1972 Munich Olympics, where 11 Israeli olympians and one German police officer were killed by the terrorist group Black September. Despite the known tensions between Israel and Palestine, the organizers for Munich had spent around two million dollars on security for their games, while it’s estimated that Russia spent 900 million dollars on security for its games. Even during the 2002 Salt Lake City Olympics, while America was still reeling from 9/11, approximately 190 million dollars were spent on security. Given these figures, Russia was undeniably serious about tightening security for the games.

The next major problem in Sochi that took over the Internet were claims made in media from the New York Post to Time’s blog that Russian officials had fixed certain events. The most prominent of these events was figure skating, where South Korea’s Yuna Kim, who holds a world record score in figure skating, lost gold to Russia’s Adelina Sotnikova. Over two million people have signed a petition requesting the International Olympic Committee to review Kim and Sotnikova’s performance for reevaluation.

However, the concept of fixing events so that a certain country can win, or bribing committees isn’t a new Olympic issue, and is certainly not exclusive to Russia.

In 1998, a report documented that the International Olympic Committee had taken bribes from the Salt Lake Organizing Committee to hold the 2002 winter games in Salt Lake City. Investigations later uncovered that the host of the 1998 Olympics, Nagano, was guilty of the same. Even if there were bribing scandals involved in the Sochi games, Russia is not the first country to do so.

Since drug use controls were introduced to the Olympics in 1968, athletes in nearly every olympic games since then, from nearly every competing country, have been busted on their use of performance enhancing drugs (PEDs). The United States and Russia have both had athletes caught with banned substances at nearly every games since 1968, and because no Russian athlete had been caught doping during these games, gossipers on social media spread the rumor that Russia used their home advantage to avoid being caught.

These claims have no merit, because the host country does not conduct PED testing. The World Anti-Doping Agency is presently responsible for testing athletes, so a home advantage would be impossible in PED testing.

If the logic that athletes from host countries could get away with using PEDs had merit, the United States would be guilty of cheating as well, because no American athletes were caught doping during the olympics held in Los Angeles, Atlanta, and Salt Lake City.

If keeping PEDs out of the Olympic stage to allow for fair competition is a goal taken out of Sochi, that goal should have come after the 2002 Salt Lake City Olympics, where the most athletes in a winter games were caught doping.

Sochi’s failures were, for the most part, not exclusive to Russia. The majority of the claims of cheating directed toward Russia is just a continuation of the Olympic’s long history of politics and scandal. If the spirit of the Olympics is to be preserved, those rallying their support to investigate Russian scandal should also take the time to examine the breeches within the Olympics themselves.