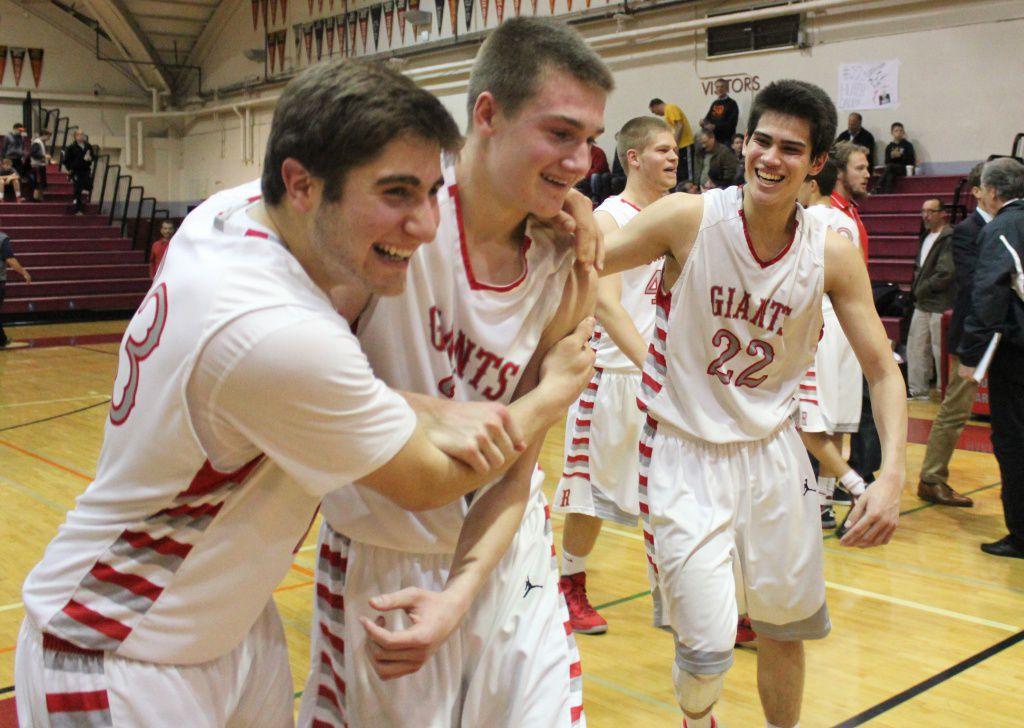 Nick Jones, Will Breck, and Jack Bronson rejoice after Breck's last-second free throw sent the Giants to the MCAL semifinals.

As the last-second shot of San Rafael forward Hayden Salvas fell to the floor, both teams prepared for overtime. Then came the whistle.

The ref made a pushing gesture in the air and pointed at Salvas. Both teams stared in disbelief while he explained that Salvas had pushed Breck while the two scrambled for the rebound of the previous shot.

“We were both going for the ball, so it could have gone either way,” Breck said.

Amidst the rejoicing of the Redwood half of the gym and the angry protesting of the San Rafael half, Breck walked down the court as he realized he would be shooting free throws with 0.8 seconds left. Breck’s first free throw teetered on the edge of the rim before dropping in, sending Redwood to the league semifinals with a 51-50 win that ended San Rafael’s MCAL season on Tuesday night.

“It was [expletive] [expletive],” said San Rafael’s Liam Maley, who scored a team-high 12 points. “In any game, you have to earn a win. You can’t be given a win, and I feel like that’s what happened.”

The two teams had played competitively all night long, with San Rafael pulling ahead early in the fourth quarter.

“Defensively, I thought all our guys did a pretty nice job with the physicality of the game,” San Rafael coach Scott Springhorn said. “We controlled the rebounds for the most part. Guys really battled, and we were able to get to the rim a lot, which was great.”

Maley, in particular, made his way to the rim many times in the fourth quarter, leading San Rafael to a four-point lead with a little over a minute left before fouling out. But without their leading scorer, the Bulldogs relinquished the lead.

After Molefi Thompson, who led Redwood with 17 points, cut the deficit to two with a pair of free throws, Redwood forward Nick Jones earned a trip to the line with a chance to tie the game.

Jones’ first free throw clanked off the back of the rim.

After sinking the second, he walked to the bench and angrily pounded the cushion on his seat, thinking he might have cost his team a chance at victory.

Redwood coach Steve Compagno took a timeout to draw up a play in the huddle for Jack Bronson, whose 14 points on 5-of-5 shooting had kept the Giants in the game.

“The plan was for the ball to go to Molefi and then to dump it down to Jack,” said guard Mike Sullivan. “But it didn’t happen.”

Instead, the ball ended up in the hands of Sullivan, a sophomore who played just eight minutes throughout the game.

Sullivan, who has earned an increased offensive role lately, drove hard to the basket, drawing a foul.

“It would have been nicer if the layup went in because there was a lot of pressure to make the free throws,” Sullivan said. “It was like ‘Oh, no, I gotta make these now. This is scary, I don’t want to let my teammates down.’”

He did not let them down, swishing both shots to tie the game with a little over ten seconds left.

Without Maley, their offensive leader, the Bulldogs flung up a contested three in hopes of ending the game but the shot caromed off the rim and towards the stands. As Breck and Salvas chased after the rebound, Salvas placed a hand on Breck’s rib area, drawing the game-changing whistle.

The ref’s controversial call was ridiculed by fans of both teams, as several Redwood parents approached San Rafael coach Scott Springhorn to express their sympathies after the game.

“You know, I didn’t see it,” Springhorn said of the hotly contested play. “It’s one of those things where that’s what was called and that’s what you have to go with.”

Springhorn said he expected his team to receive an NCS bid, meaning San Rafael’s season may not be over.

Redwood will move in the MCAL playoffs to face second-seeded Branson on Friday.

“We’ll have to play much better,” Compagno said of facing the Bulls, who clobbered the Giants just two weeks ago by a score of 51-34 on Redwood’s home floor.

Springhorn said Redwood has a chance to make some noise as the playoffs continue.

“They’re dangerous,” Springhorn said. “Every guy at every spot can shoot the ball. They bring in guys off the bench that would be starting on other teams.”

Bronson was the star for Redwood against San Rafael, playing one of his best games on both ends of the floor, adding four assists on top of his perfect shooting and locking down Maley on defense. Maley, who averages 13.5 points per game, struggled to even get open in the first half, only finding his scoring touch once Bronson was hampered by four fouls in the second half.

“That was just me being a clamp-show,” Bronson joked after the game.

“It’s always frustrating when you have a man in your face 24/7,” Maley said.

Compagno said he was proud of his team for pulling out a tough victory.

“I wouldn’t trade a guy on my team for anybody,” he said. “We have guys who’ve stepped up, we have younger kids who really play hard. Mike Sullivan sunk some huge free throws. Jake Curhan played some great defense and took a charge to wipe a basket off.”

Most of what fans will remember about the game is centered around the last call, however.

“I paid the refs nothing,” principal David Sondheim said.